From the APS Corporate Administrator: “The following summary was written by Malina ‘Molly’ Dallmann, at APS Texas, in reference to the above-cited Wall Street Journal Article (WSJ) on airline upset training. The original article is available to WSJ members and, in approximately 4 weeks, it will be released to the general public. We’ve provided a link at the end of the article for those with Wall Street Journal memberships.”

The IS NOT a reproduction of the original article. 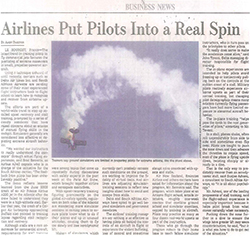 There is a new trend in commercial jet pilot training and it involves real world experience in a small propeller-powered aircraft. Two major airlines, South African Airways and Delta Air Lines Inc., are sending their instructors back to school to learn how to recognize and recover from airborne upsets. Prompted by a series of deadly accidents, there is a worldwide trend beginning to enhance upset recovery and stall training. Simulators were previously the main component in this training, but beginning with these two major carriers, on aircraft training is increasing. Brad Bennetts, a South African Airways Airbus A340 Captain, says that they want their instructors to really understand the concepts through actual flying experience. He goes on to say that the feedback from his instructors has been unbelievably positive.

At the recent Paris Air Show, there were discussions over requirements for stall training, and although stalls are a rare occurrence for commercial aircraft, two major events in an Airbus A330 (Air France flight 447) and a Colgan Air turboprop (flight 3407) brought to light the need for enhanced training. Regulators are mandating additional simulator sessions to mitigate the problems due to a lack of training in the area of upset recovery. Despite advances in simulator technology, South African Airways and Delta Air Lines Inc. have opted to go beyond simulator training and the new government mandates. The training managers for these major carriers maintain that nothing is as effective as having their instructors behind the controls of an aircraft to experience the violent motion that can be associated with upsets and stalls.

Several other airlines are now looking at the program as well. The program is conducted by an Arizona-based flight school (Aviation Performance Solutions) and entails intensive one-week courses that combine ground school and simulator exercises, capped by training in aircraft. Pilots practice recovery from dozens of real-world upsets over the course of the training. The instructors that go through the course then pass the information learned onto fellow simulator instructors who then teach it to the airline’s pilots. John Tovani of Delta Air Lines Inc. says “It really does serve to make the academics come alive.” The in aircraft experiences are intended to help pilots avoid the natural instinct to pull back on the controls at the onset of a stall. When the plane shakes, rolls unpredictably or even flips over in a stall, the pilots in this training are taught to reduce the angle of attack of the wing by first pushing the nose down and then advancing the throttles to recover. Sunjoo Advani works with South Africa Airways and is one of the leading proponents of enhanced stall training, says that that is the only way to predictably recover from an aerodynamic stall.

He goes on to say that the flight school experience helps the pilot break from what comes naturally and though pushing the nose further into a dive may seem counter-intuitive “it is what you have to do to get out of the situation.” Private pilots spend time practicing aerodynamic stalls before they get their license. Regulators in Europe have now mandated additional stall-recovery practice in flight for pilots training for approval of a commercial license. The question has been raised of at what stage during their training pilots should be exposed to stall-recovery maneuvers. Patrick Ky, the European Union’s top air-safety official, said that the latest rules require that “all pilots will have to be trained in a real aircraft” in these enhanced recovery procedures prior to being cleared to fly passengers. Insurers are even agreeing to pay for some of the tuition of this training after hearing of the safety benefits. As mentioned previously, other airlines are looking into this training; an extremely important step forward for the safety of the crews and passengers of these carriers.