Flight Below the 1-G Stall Speed

The Zoom Maneuver is an altitude-gaining maneuver where the nose of the aircraft is pitched excessively nose-high and then gently unloaded to a light positive G. The attitude of the aircraft is allowed to decrease so as to pass through level flight well below the 1-G stall speed while the pilot keeps the wing below the critical angle attack and, therefore, in the normal flight operating envelope. This exercise is presented in the first flight of the Upset Recovery Training and Emergency Maneuver Training courses and is typically the trainee’s first exposure to aerodynamic concepts and flight regimes not experienced in conventional flight training.
Referring to the V-G Diagram below, we see a distinct boundary shown as a curved white line between the Stall Region (light blue) and the Normal Flight Region (dark blue). The shape of this boundary is a function of the design of the wing and defined by the critical angle of attack for a given wing configuration (ie. flap setting, for example). When the critical angle of attack is exceed, the aircraft is in the Stall Region. As the vast majority of pilots spend their entire aviation career living along the 1-G line on the V-G diagram, the Zoom Maneuver is a great tool to demonstrate the normal flight envelope below the 1-G stall speed. On this V-G Diagram, we can see the 1-G stall speed for this wing configuration is approximately 63 kts.
Exploration of the stall above the 1-G stall speed falls under the category of Accelerated Stalls and is covered later in the APS program. 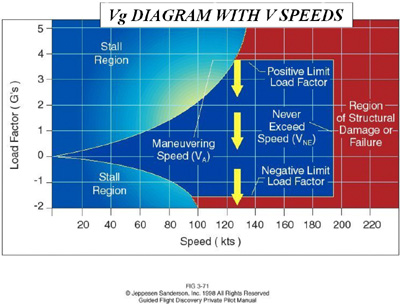 Although there is a specified 1-G stall speed for every aircraft (~ 58 knots in the Extra 300/L), it is possible for an aircraft to fly below the 1-G stall speed without stalling. This is a characteristic of all aircraft. Stall speed is a function of angle of attack and an aircraft can stall at any speed if critical angle of attack is exceeded. Stall recovery involves reducing the angle of attack. If we carry this to a logical conclusion, we should be able to fly below the 1G stall speed without stalling if we are commanding less than 1-G. This is an important concept to understand for stall and unusual attitude recoveries because unloading the aircraft does several things for us: (1) Gets us further away from the critical angle of attack and therefore further from a stall; (2) Makes the ailerons (or spoilers) more effective for roll control due to reduced angle of attack and induced drag; (3) Helps maintain energy in terms of airspeed due to reduced induced drag resulting in more controllability; etc….
It is important for the client to recognize the aircraft needs to maintain a slight positive G-loading during unloaded recovery maneuvers (at no time is negative or zero G-loading an targeted flight condition) to ensure the engine is not starved of fuel and/or oil. Other tremendously important benefits of being unloaded to a light positive g-loading, especially in any overbanked or nose-high recoveries, is discussed in more detail in later exercises. More information on the V-G Diagram and how the techniques developed in the zoom maneuver are related to effective upset recovery can be found at: click here.
Let’s watch a demonstration of The Zoom Maneuver in the Extra 300L … please note that this maneuver should not be attempted without the guidance of an experienced instructor and the use of a suitable aircraft.