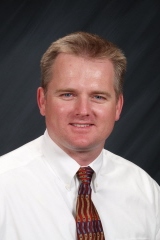 The Aileron Roll is a fundamental maneuver in the successful application of over-bank upset recovery techniques in any class of fixed wing aircraft. If you talk with your aerobatic pilot friends, they will confirm there are numerous ways to roll an aircraft; aileron roll, slow roll, snap roll and so on… talking with your air show pilot acquaintances, they will add others to the list; rolling circles, twig roll, torque roll and many more. In this discussion we are isolating the Aileron Roll as a maneuver that’s “techniques of execution” can be transferred to any aircraft. The goal of all courses offered at APS Emergency Maneuver Training is to develop piloting skills that are directly transferable to the client’s own aircraft.

As we learn from our private pilot flight training, an aircraft produces lift perpendicular to the main wing through a theoretical location placed at the center of pressure. As can be seen from the diagram below, in level flight the amount of lift required to be generated by the main wing to sustain level flight is equivalent to the sum of the aircraft weight (acting through the center of gravity towards the earth’s center) plus the tail down force. The positioning of the center of pressure between the center of gravity and tail down force is critical to the stability of an aircraft. 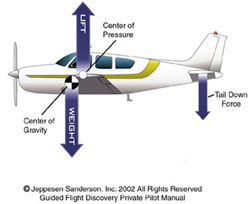 The vast majority of commercial and general aviation flying is spent at less than 30 degrees of bank and, for the most part, we repeatedly demonstrate to ourselves that aft stick or yoke movement results in the aircrafts nose moving “up” in relation to the horizon. At less than 30 degrees of bank, that observation is close of enough to reality that we become convinced over time that this is an axiom of flight. Unfortunately, our hours and hours of experience affirming “aft yoke movement equals up” becomes our greatest enemy in an over-bank situation.
Consider the diagram below that shows an aircraft in a 45 degree bank turn. It is clear from the diagram that as the bank angle increases, the amount lift generated perpendicular to the wing (labeled LIFT) must increase in proportion to increasing bank angle to generate sufficient lift in the vertical (labeled Vertical Component of Lift) to equal the vertically opposing weight of the aircraft. 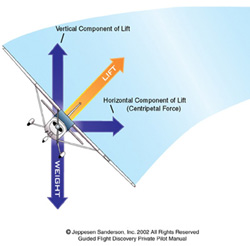 At 45 degrees of bank, we need to command 1.4 G to remain at a constant altitude (or, in other words, a lift vector 1.4 times its original wings level magnitude). At 60 degrees of bank, we need to command 2.0 G (the lift vector must be twice as big as when in a wings level flight attitude) to remain at the same altitude. Again, this is accomplished by generating a vertical component of lift equal to weight. As bank angle increases, a smaller and smaller component of the lift vector acts in the vertical to oppose weight thus requiring a larger and larger lift vector (labeled LIFT). The flight control that controls the magnitude of the lift vector is the elevator which is analogous to aft stick/yoke movement by the pilot. As bank angle continues to increase, the ability of an aircraft to maintain altitude will ultimately be limited by the “limit load” of the particular aircraft.

It should be now clear that we can not maintain our altitude at bank angles in excess of those listed above by continuing to pull on the yoke alone. If we do continue to pull, we now have all the ingredients for the generation of a Spiral Dive. Cockpit indications of the Spiral Dive are; increasing G-loading, airspeed increasing, increasing dive angle accompanied by rapid altitude loss. If the bank angle increases to beyond 90 degrees, we can see from the diagram below that any lift being generated by the wing now acts in the same direction as gravity resulting in an rapidly increasing nose-low flight attitude. 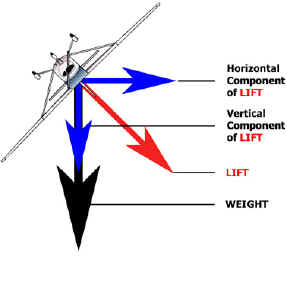 So what is the point of this discussion? The point is this; what happens when your aircraft ends up in an attitude that exceeds these bank angles or beyond 90 degrees of bank? This could have occurred from inattention, distraction, wake turbulence and/or disorientation. Regardless of how it happened, it is up to you as the pilot to recover the aircraft while minimizing altitude loss, remaining with the structural limit of the aircraft and not exceeding Vne. Pulling harder is not the answer – unfortunately, “pulling” is the typical response of most pilots not familiar with the over-banked situation.
Based on data tracked at APS Emergency Maneuver Training over the past 3 years, a whopping 75% of pilots without aerobatic training, when exposed to their first over-bank scenario, react with an aggressive “pull” on the yoke in an attempt to “make the houses smaller”. In an overbank, this instinctive pull results in the aircraft point straight the ground within seconds as the pilot transitions to a Split-S Maneuver losing well over 1000′ of altitude (if not 2000’+) and gaining a significant amount of airspeed, usually approaching Vne. We should not be surprised by the this panic response as the vast majority of our general aviation and corporate flying is spent at less than 45 degrees of bank where “PULL equals UP”. Unless you are an aerobatic pilot, how many times have you been beyond even 60 degrees of bank in your normal category aircraft? If you think about it for a moment, you will most likely conclude that less than 1/10 of 1%, if any, of your flying time is spent in excess of even 45 degrees of bank.
Simply put, our over-bank flight attitude requires immediate attention and our past experience is likely going to be of little practical assistance in resolving the situation. We must do something right away and we need to seriously consider that our initial response is likely going to be the wrong response … this is even more likely if you have not had upset recovery training that has exposed you to the over-bank situation in a real aircraft.
So what’s the answer? In an over-bank situation, please review our training article on the All-Attitude Upset Recovery Technique Checklist for details on recovering an aircraft from any over-bank, stall or unusual attitude scenario. Please take a moment to review the video below … thank you for reading this APS Training Newsletter distribution.

The video clip below is a fast-paced overview of the aileron roll created specifically for this newsletter. At the end of the clip, the pilot demonstrates how the Aileron Roll technique can be applied to an over-bank situation such as a Wake Turbulence Encounter. During training at APS, be assured that much more time is spent on practicing the aileron roll technique than just one demo. The ability of a pilot to properly execute an Aileron Roll is critically important in the effective recovery from any unusual attitude.