Before Reading this Tail Plane Icing Article
A Pilot-to-Pilot Message from APS Flight Training and Standards
Attention Pilots,
There is much controversy concerning the topic that follows. Despite this, we feel safety-conscious pilots should have access to pertinent tail plane icing information whether out of necessity or simple curiosity. However, and this is important, a deep understanding of tail plane icing concepts is needed for pilots as just a limited or cursory understanding of the information that follows could have dire consequences. Although the aerodynamic information below is accurate based on available resources at the time of  writing, this information should not be considered a pilot’s primary source of information on the tail plane stall.
All pilots (even those pilots where their model of airplane is listed below) MUST consult with their manufacturer as the primary and official resource to determine:

The following industry opinion is offered for your consideration as a pilot:
Opinion: A recent FAA rulemaking committee recommended the removal of tail plane icing theoretical training from those aircraft types that are not susceptible to tail plane icing. Their stated concern was that a general working knowledge of the subject could lead a crew to do the exact opposite of what is required in a stall.
As a specialized training provider, having trained many thousands of professional pilots in upset recovery training over the past two decades, APS respects and understands the statement above but we do not fully agree with it. In our experience, pilots are mystified by the tailplane icing threat (other than that tail plane icing occurs in icing conditions) and they lack awareness of two primary factors: 1) the very limited list of airplanes it applies to, and 2) the basic aerodynamic factors in diagnosis. In our opinion at APS, leaving a pilot mystified for fear they may not properly apply their knowledge correctly does not address the deficiency. With that said, pilots must THOROUGHLY understand the information that follows, especially the understanding that only a very limited number of airplane models are susceptible to this phenomena and that the airplane’s manufacturer is the primary source of operational information.
The following message will be reiterated through the article that follows: In the vast majority of cases, the main wing stall in both icing and non-icing conditions is a much more likely threat of loss of control in-flight than the tail plane stall.
Sincerely,
Clarke ‘Otter’ McNeace, APS VP Flight Training & Standards
Related Articles:

In this article, I’ll explain what an Ice Contaminated Tailplane Stall (ICTS) is, and how to differentiate between an ICTS and a main wing stall. I’ll also explain which aircraft, or which types of aircraft, are most susceptible to an ICTS encounter.
NASA conducted a Tailplane Icing Program (TIP) in the late 90’s in response to an FAA request for further study into the matter. At the time of the study, ice contamination on tailplane surfaces had already been blamed as the primary cause of 19 aircraft accidents resulting in 139 fatalities.
The key to avoiding an ice contaminated tailplane stall hinges on a sound aerodynamic understanding of what can cause it.  Any aircraft that has a horizontal stabilizer and is susceptible to ice accumulation is also susceptible to an ICTS. When an aircraft encounters icing conditions, ice can build up on any surface of the aircraft. Modern aircraft employ various measures to battle ice buildup including de-icing boots on the wing, horizontal and vertical stabilizers, and ant-icing systems.
Ice accumulation can disrupt the smooth airflow on the main wing. And no matter where it collects on the aircraft, it can add a tremendous amount of weight. Both of these events can increase the stall speed of the main wing and aggravate stall characteristics. So the pilot must be wary of a main wing stall when ice accumulation is noticed. It is the same icing environment that can lead to an ICTS. Unfortunately the pilot cannot usually see what is happening to the tail surfaces. So it must be assumed that if ice is collecting on the wings, it is also collecting on the tail surfaces. To understand what happens in an ICTS, one must understand how the tailplane works to achieve equilibrium of forces on an aircraft, when the tailplane is operating near its aerodynamic limit (i.e. close to its critical AOA) and how ice accumulation, configuration changes and airspeed and power changes effect the aerodynamic limit of the tailplane.
An aircraft’s center of gravity (where the aircraft pivots) is normally forward of the center of pressure. This produces a natural pitch forward moment of the main wing (Figure 1, below). The horizontal stabilizer is essentially an inverted wing, and provides a stabilizing downward force to achieve equilibrium. As flaps are lowered, the center of pressure moves aft creating a greater pitch forward moment (Figure 2). Also, as flaps are lowered, the downwash from the main wing strikes the horizontal stabilizer at a greater downward angle, creating a greater tailplane angle of attack (Figure 3). So, as flaps are lowered, the pilot must pull back on the yoke bringing the elevator up and increasing the downward force of the horizontal tail (Figure 4). This causes the tail to perform closer to its aerodynamic limit, possibly at time when icing is present on  the leading edge of the horizontal stabilizer. 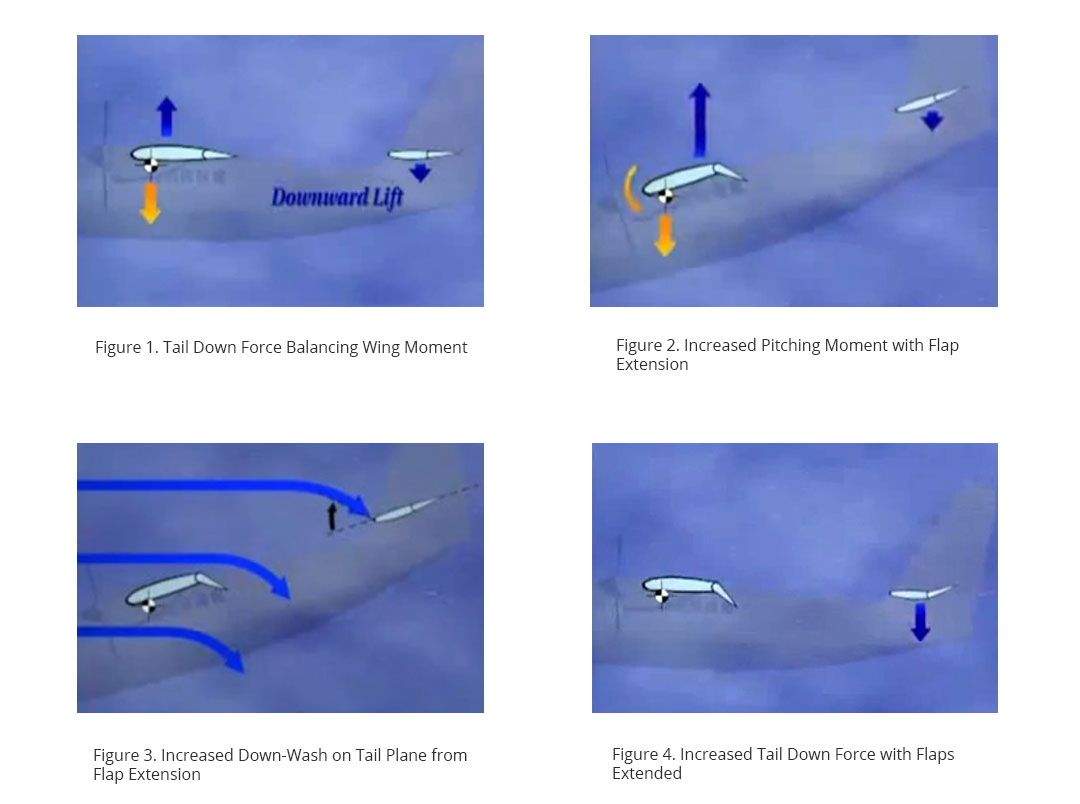 Ice accumulation on the leading edge of the horizontal stabilizer (Figure 5, below) can be much more severe relative to its leading edge radius than on the main wing. Ice buildup on the leading edge of the tail decreases stalling AOA of the tail and limits the amount of tail down force achievable to keep the aircraft in equilibrium, especially as flaps are lowered. The ice on the leading edge produces an airflow separation “bubble” aft of the tailplane leading edge on the underside of the tail (Figure 6). If that low pressure bubble moves aft and behind the hinge point of the elevator as AOA of the tail increases, the elevator surface could be forced (pulled) down abruptly to fill the low pressure void. This would pull the yoke forward. Operating with a forward CG can aggravate the problem due to the increased pitch forward moment of the aircraft causing increased tail down force and tailplane angle of attack.

Flying on autopilot can mask the warning signs that tail plane icing is occurring and a tail plane stall imminent. Specifically, the pilot may not notice tactile feedback cues. Moreover, symptoms may not be noticed in cruise flight since the horizontal stabilizer is not working anywhere near its performance limit. The pilot may actually not notice any problem until flaps are lowered close to the ground.
A typical progression of symptoms might be:

NASA identified three paths which could lead to a tail plane stall in the presence of tail plane icing. They are:

Once a tailplane stall occurs, nose down pitch rate can increase rapidly. Altitude loss can easily reach a few hundred feet even if control is regained. This can be disastrous if on final approach. Avoid full extension of flaps. And if any flaps are used, it is recommended to extend them at a safe altitude that would allow for successful recovery if a tailplane stall occurs. Make pitch changes slowly, particularly nose down movements. If the airplane has a deicing system, activate the system several times to attempt to dislodge the ice. Land with reduced flaps if conditions permit.

Note to Pilots: In the vast majority of cases, the main wing stall in both icing and non-icing conditions is a much more likely threat of loss of control in-flight than the tail plane stall.

If the pilot determines that there is control buffet or lightening of the controls, and has difficulty trimming the aircraft, or is experiencing PIO, he should immediately pull back on the yoke to counteract an un-commanded forward movement of the yoke, reduce flaps to previous setting and be cautious with power. Pulling the yoke back and retracting the flaps to the previous setting are universal. And NASA determined that it is often wise to be very judicious with power since power increases can make the tailplane have to work much harder. Also, it is important to maintain airspeed precisely.
This recovery is of course opposite compared to a main wing stall recovery which would be to relax back pressure or push yoke forward depending on aircraft, configuration and trim, and to add power. And a pilot not acutely aware of the oftentimes subtle differences between a main wing stall and a tail plane stall may apply the wrong recovery technique in an altitude critical environment with potentially disastrous results.
Another way to differentiate between the two stalls is configuration and speed. If flaps are lowered at the high speed range of flap extension and control buffet occurs, there is a good chance that tail plane icing exists. The higher the airspeed when flaps are extended, the more susceptible the aircraft is to a tailplane stall.
Aircraft Susceptibility to ICTS: The following are traits of types of aircraft that are susceptible aircraft common characteristics:

Note to Pilots: In the vast majority of cases, the main wing stall in both icing and non-icing conditions is a much more likely threat of loss of control in-flight than the tail plane stall.

Here are some key points to remember:

Below is a comparison of causes, susceptibility, characteristics and recovery procedures for a Main wing stall and an iced induced tailplane stall: 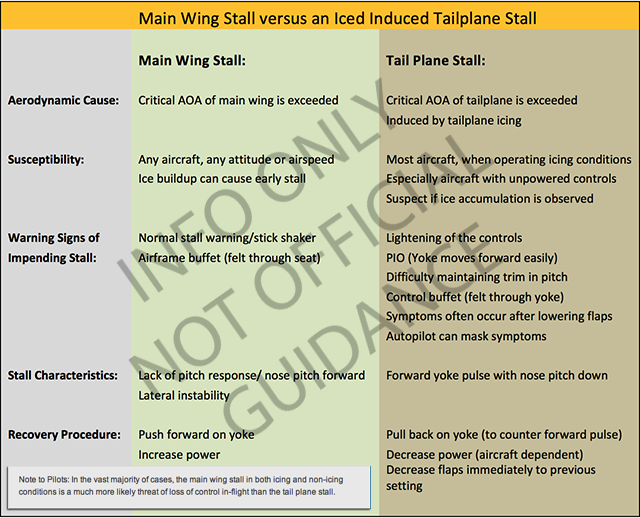