Skip to the Video Clip.

During the Upset Recovery Training Course at APS, we put our clients into a wide variety of scenarios that prepare them for the over-bank or “upset” flight condition. In any overbank scenario, the ultimate goal is to keep the aircraft flying (ie. unstalled), re-orient the lift vector to an upright attitude and then initiate recovery to a climb away from the ground. If you haven’t been through upset recovery training or had aerobatic instruction previously, this is much easier said than done. 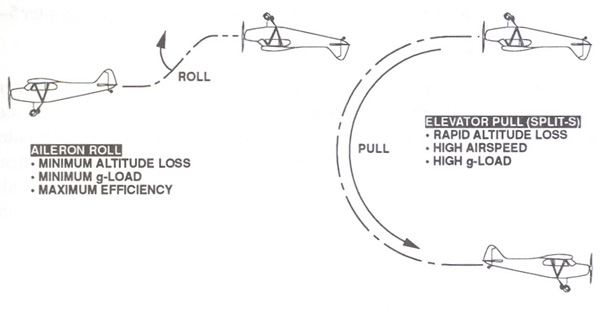 The Split S – Page 120
Emergency Maneuver Training: Controlling Your Airplane During a Crisis

IMPORTANT NOTE: It must be emphasized that the Split-S Maneuver shown in this video (below) is an exercise in what NOT TO DO in an overbank situation. We find it to be a very effective and dramatic technique to demonstrate the risks, life-threatening dangers and challenges of the split-s pull through response to an over-bank situation in-flight. As a few of our members have already observed, in an over-bank situation the pilot needs to continue the roll around to upright flight using an unloaded aileron roll type maneuver.
At APS, the demonstration of this Split-S Maneuver takes place in the second flight of the 3-mission, 5-mission or 6-mission course immediately following an in-depth flight training session on cross-controlled stalls. In the cross-controlled stall exercises, the aircraft often ends up in an over-banked flight condition (especially the skidded turn traffic pattern stall). Now, it’s important to recognize that it doesn’t matter how we got over-banked, the fact is that we are there and need to respond correctly with an unusual attitude recovery. Scenarios leading to an over-bank flight condition include; wake turbulence upsets, a spiral dive, pilot distraction, cross-controlled stalls and/or wind shear, just to name a few.
Statistically (at APS), a whopping 80% of pilots exposed to their first over-bank scenario initially react with the panic response of “PULL TO MAKE THE HOUSES SMALLER”. This is understandable considering the vast majority of pilots spend 99.99% of their flight time at less than 45 degrees of bank where PULL does mean THE HOUSES GET SMALLER. Unfortunately, in an over-bank scenario (usually in excess of 75 degrees of bank at APS), a pull or aft movement of the control column only buries the flight attitude of the aircraft steeper into a dive. To drive home the adverse consequences of pulling in an overbank scenario, the clients at APS get to fly through a full Split-S maneuver with both power-on and power-off to witness first-hand how all the maximums and/or limitations of the pilot and aircraft are immediately forced upon them because of burying the nose from a pull. What maximums are we referring to in the Split-S? They are:

So what’s the moral of this story? Simple. In an over-bank scenario DON’T PULL … immediately apply Unusual Attitude Recovery Techniques to re-orient the lift vector, minimize altitude loss and get away from the ground. Please take a moment to look at the image to the right. Would you roll upright from this in-flight upset condition the first time you were there? We can only hope … if not, have a look at the video below to see what happens when we pull through. Better yet, come get some life-saving (and fun) training from APS or any other recognized aerobatic training flight school… Safe journeys to all!