*The following article is a condensed online version of the white paper.

You are the PIC of a twin engine aircraft during takeoff. Just after liftoff, a very loud “bang” is heard; the aircraft suddenly yaws and rolls to the right and rapidly begins losing airspeed. The response to this V1 cut/right engine failure on takeoff is memorized and trained to proficiency because of the time critical nature of the emergency. The cues are easily recognizable and predictable due to practice and repetition and the response is almost automatic. This is a familiar, well-rehearsed event that all multi-engine pilots are prepared to address.

Now let’s pretend you are the PIC of that same aircraft but for some reason you have never had any training for an engine failure on takeoff. You are now experiencing this time critical emergency for the first time, on your own, with no qualified instructor in the aircraft.  How well do you think you’ll do?  Do you think that your experience and background in all other aspects of basic pilot training would save you and the aircraft?  Silly question, because that can’t happen, right?  That’s not how we train. Yet we treat upset training the same way as this “silly” imaginary scenario. We don’t train for flight outside of the normal operating envelope as part of any required civil pilot training regimen. Let’s look at the results of this approach.

The accident statistics tell us that in both commercial airlines (top chart) and FAR Part 135 accidents (bottom chart), engine failures, or system component failures-powerplant (SCF-PP), are 4th or 5th down the list of contributors to accidents and fatalities. Loss of Control In-flight (LOC-I), on the other hand, is the leading contributor to fatalities and fatal accidents in both venues of aviation. It is clear that normal pilot training does not train pilots effectively for upset/LOC-I situations; situations that are the number one killer of people and destroyer of aircraft across every sector of aviation worldwide. 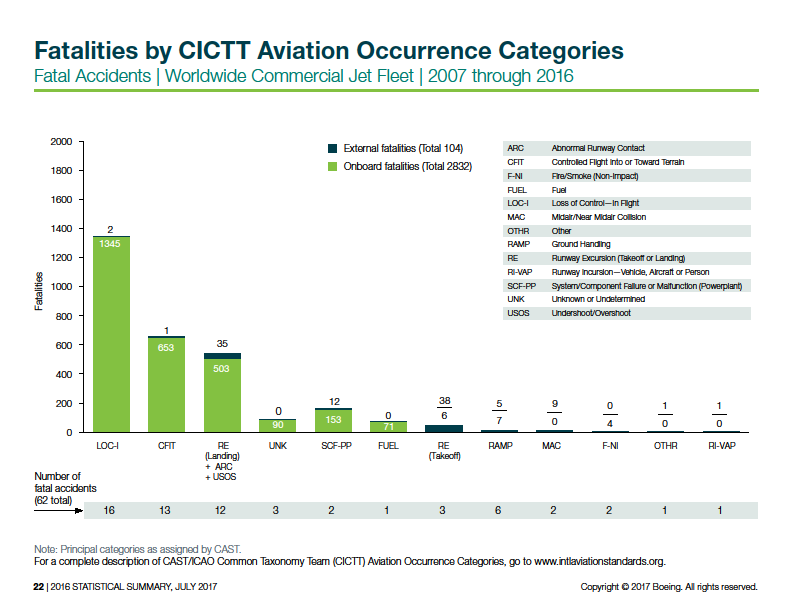 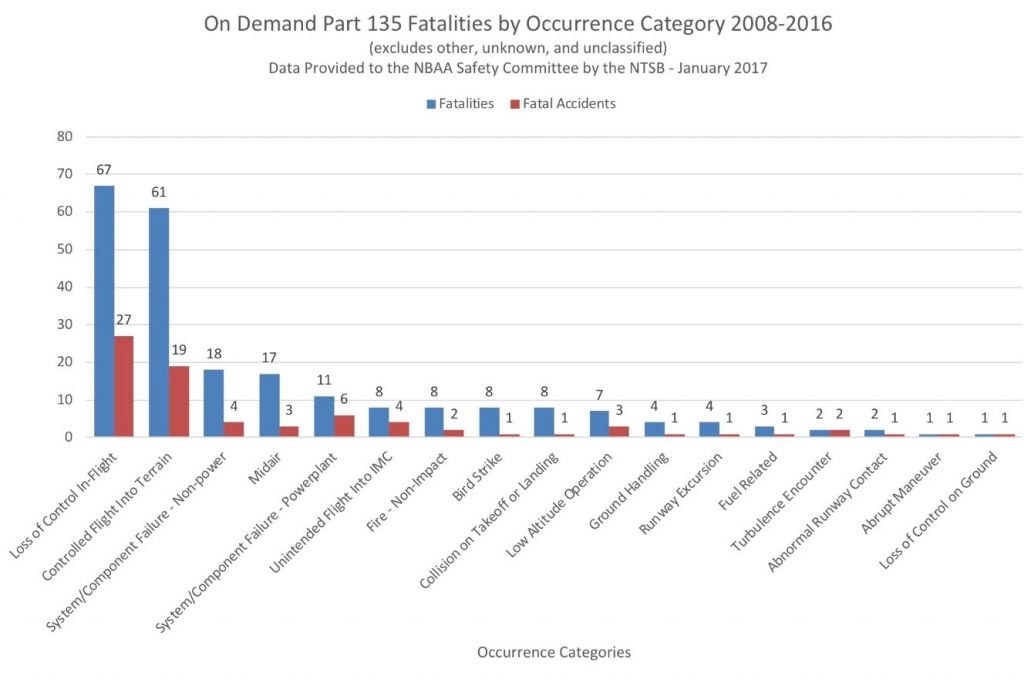 Pilots facing an airplane upset or LOC-I situation are usually rapidly hurled out of the normal licensing flight envelope with no training to implement a time-critical response to a rapidly escalating emergency situation, much less, safely recover from the ensuing LOC-I.  They are expected to build a response to this “worst case” scenario as it is happening. The rapid rate of development of these escalating emergency situations and the associated human factors of startle, surprise and fear impede their cognitive ability and response time. Yet pilots facing an engine failure at the worst possible moment do just fine due to training which is commensurate to the task.

“One faulty assumption by pilots is that their day-in, day-out expertise in the [normal envelope] will give them the skills, discipline and awareness necessary to prevent or recover from an airplane upset event.” [1]

In their 2004 paper, “Defining Commercial Transport Loss-of-Control:  A Quantitative Approach,” James E. Wilborn and John V. Foster developed a set of metrics for defining LOC-I, known as the Quantitative Loss-of-Control Criteria (QLC):
The criteria are composed of five parameters that capture the most important relationships between these parameters. “… if a maneuver crosses three or more envelopes, it will be classified …as “out of control.” [2]

In their analysis of six commercial aircraft LOC-I accidents, Wilborn and Foster found “in all but one case, the (LOC-I) situation progressed from an initial upset to a state of lost control in less than 10 seconds.” [2]   Hesitation, delay or a wrong decision in this “critical window” may make the situation non-recoverable. Basic skills trained in the normal flight envelope are not necessarily appropriate and/or sufficient to consistently and safely prevent or recover from these situations.

A 1979 Air Force Office of Scientific Research Study “Aircraft Emergency Decisions: Cognitive and Situational Variables” determined that pilot responses to aircraft malfunctions and resulting behavioral outcomes are predictable. These emergencies involve straightforward relationships between cues and malfunctions and therefore responses are programmable. This conceptualization makes it possible to deal with the notion of “templates” in the pilot response process. Templates are preplanned responses to emergencies. This concept is very applicable to upset/LOC-I training in that aerodynamics and general aircraft behavior in upset/LOC-I situations are generally predictable (see QLC above) and therefore a trained response can be implemented to address a myriad of upset/LOC-I situations.

This concept becomes even more important in the high altitude environment where pilot stick and rudder skills are rarely, if ever practiced and the suddenness of an upset/LOC-I event will, in all likelihood, require the pilot to rapidly transition from flight deck management skills to stick and rudder flying skills to safely recover the aircraft while in a very narrow flight operations envelope and an environment where aircraft performance is profoundly reduced.

An aircraft emergency can combine the physiological effects of the flight environment with the requirement for rapid, complex decision making under conditions of uncertain information and high personal risk. Therefore:
“… the element of threat or personal risk is the critical factor that underlies the human operator’s decision errors…a pilot’s reaction to the threat…may be characterized by (i) a sharp increase in excitability expressed in impulsive acts, impairment and loss of skills or (ii) inhibition and even the cessation of activity…[and]...result in a disorganization of rational activity…Adequate mission performance requires more than just the requisite mechanical skills. [3]

This cessation of activity is described as “Freezing Behavior” and “can be accounted for by considering the temporal constraints on cognitive information processing in a rapidly unfolding, real-time environment.  1.) If an appropriate response to such an event has been prepared… the speed of response can be as fast as 100 milliseconds…. 2.) If more than one possible response is available, then simple decision making…can take 1–2 seconds. 3.) If no appropriate response exists… then a [response must] be created. This will take at least 8–10 seconds under optimal circumstances and much longer under threat.” [4]  This exceeds the 6-10 second critical window described above…discounting a “lucky guess.”

“The clear implication is the importance of training…”; training “that provides the temporal and working memory capacity necessary to create a temporary schema of actions, to assemble those actions into the correct sequence, and then to combine those actions into a composed whole, thus reducing cognitive storage and processing demands. Once this process has been completed, an environmental danger signal (cue) can trigger the appropriate composed response…Clearly, lives could be saved if these principles could be applied…” [4]

“…The entire pattern of cues must be trained so thoroughly that the correct responses to it are immediate…When this is the case, very little decision-making is necessary at the time the malfunction is diagnosed…Fortunately, with highly practiced tasks, …performance becomes largely automatic, and we can perform these practiced tasks with minimum attention and effort.” [3]

The aforementioned Air Force study also informs us that realism in training is key in that “it is argued that the subject must cognitively perceive the situation as stressful, so that he may react realistically and not “as if.” Simulation of a stressful environment…must avoid cues which invite the subject to deliberately assume a role or which provide him with more psychological support or sustenance than he will receive in the reality to which the findings must generalize. Furthermore, stressors which fulfill these [training] requirements ought to produce (1) a measurable disturbance of performance, (2) a report of awareness of a feeling of discomfort, fear, threat, or unpleasantness, and (3) a measurable perturbation of physiological processes. [3]

The above information leads to the conclusion that “presently, the required magnitude, quality and relevance of startle factor training for UPRT cannot be fully accomplished exclusively through ground-based [academic and] simulation. Appropriate UPRT training in all-attitude, aerobatic-capable airplanes readily immerses the trainee in dynamic surprise/startle and fear experiences that are recognized in scientific research as unique and necessary.” [1]

From a training standpoint, to comprehensively mitigate the upset/LOC-I threat, training programs should include:

No single training medium on its own comprehensively reduces the risk of LOC-I threat. Effective LOC-I mitigation necessarily integrates focused academics with multiple on-airplane training sessions to embed foundational skills and to address the human factors involved with unfamiliar, untrained and life threatening time critical situations. Jet pilots must transfer these core skills to their aircraft via state of the art flight simulation or flight in an appropriate jet training platform.  This “triad of training” promotes synergistic learning resulting in a powerful, hands-on experience with lasting impact and satisfies the requirements for addressing time critical pilot responses in aircraft upset/LOC-I situations. Training gives pilots the best chance for success. [3]