Following a well publicized wake vortex upset event in January of 2017 by a Challenger 604 which sustained damage resulting in its grounding and removal from service, the European Aviation Safety Agency (EASA) has released a Safety Information Bulletin detailing important information regarding the increased occurrence of wake vortex encounters at altitudes above 10,000 feet. The Challenger was travelling in the opposite direction to an Airbus A380 over the Arabian Sea at 34,000 feet when the accident occurred.

Through the release of a dedicated press release, EASA explained that the reduced separation at high altitudes (known as Reduced Vertical Separation Minimum, or RVSM) to 1,000 feet between aircraft, as well as the introduction of super heavy aircraft such as the Airbus A380 are factors influencing the increase. A greater understanding of the susceptibility to aircraft travelling in opposite directions, or with intersecting flight paths due to climbs or descents which could minimize the time available for the dissipation of wake turbulence is presented in the bulletin.

In the graphic below the relative aircraft sizes and normal wake vortex geometry is depicted. The threat can be similar whether aircraft are traveling in the same or opposite directions, and the path of the wingtip vortices can be influenced by upper level winds. 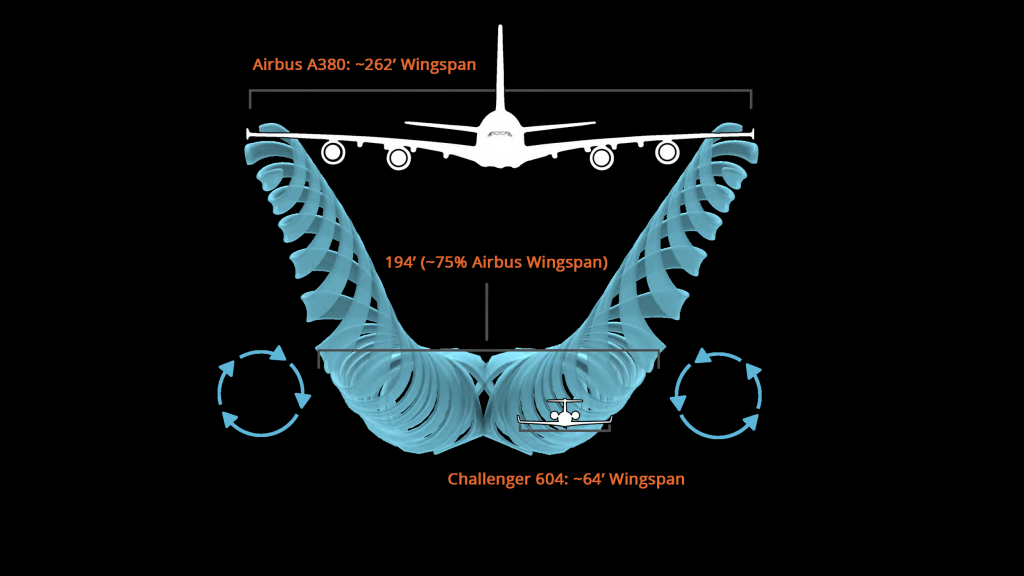 APS Upset Prevention & Recovery Training (UPRT) includes maneuvers that simulate wake turbulence encounters and can help prepare pilots to act decisively and effectively if they encounter such a situation. You can watch a video of this training in action here: APS S211 SIMULATION OF CHALLENGER-A380 WAKE ENCOUNTER