The pilot flew a GPS Rwy 35, circle-to-land runway 17 approach during night instrument meteorological conditions. A witness reported that the airplane’s downwind leg was two to three times closer to the runway than normal. The airplane’s turn radius to final approach was also much smaller than normal, and the turn was relatively “flat”. The airplane appeared to be traveling at a relatively slow airspeed during the approach, and engine rpm did not increase during the turn. The witness was “pretty impressed” that the airplane was able to complete the turn in the space available, because the turn radius was much smaller than normal. The witness also noted that he had never seen an airplane fly the turn “so flat” before, and had expected the airplane to make the turn with a much larger angle of bank since the pattern the pilot was trying to fly was so tight. As the airplane turned toward the final approach course, the witness saw it “instantaneously” change from being relatively wings-level, to being wings-vertical, with the left wing pointing straight down and the right wing pointing straight up. He then lost sight of it, and almost immediately heard a “crunch”. Examination of the wreckage revealed that the airplane had impacted the ground almost vertically, and upon impact, was facing approximately the opposite direction of the landing runway. Weather at the time included winds from 080 degrees true at 6 knots, visibility 2 1/2 statute miles in mist, an overcast ceiling at 300 feet above ground level, and a temperature and dew point of 32 degrees Fahrenheit. No pre-impact mechanical malfunctions were found. The National Transportation Safety Board determines the probable cause(s) of this accident as follows: The pilot’s failure to maintain adequate airspeed during the turn to final, which resulted in an inadvertent stall/spin. Factors included low ceilings and night lighting conditions.

The above scenario describes a low, tight traffic pattern in adverse weather conditions. Most pilots have probably found themselves in similar conditions in the traffic pattern in clear weather. How would you react to being low and tight in the base turn? Almost every pilot I’ve asked has answered that he/she has used a little bit of bottom (skidding) rudder to make the “corner.” If you were on your game, didn’t lose any airspeed, didn’t encounter any wind shear and had luck on your side, you probably didn’t even know that you were “pushing the envelope.” But the above mishap report illustrates just how deadly this situation can be if you’re not “on your game.”
Let’s delve into the deeper reasons behind this mishap other than “failure to maintain adequate airspeed.” Since the witness observed that the pilot did not use a steeper bank angle to tighten his final turn, I could safely speculate that the pilot attempted a skidding turn using bottom rudder to “make the corner.” Let’s look a little closer at the aerodynamic ramifications of un-coordinating an aircraft’s longitudinal axis in flight.
In coordinated flight, the relative wind meets a straight wing at 90 degrees as seen in Diagram 1. Wing designers can control stall characteristics by varying dihedral, wing twist, etc. The stall will occur perpendicular to the relative wind, assuming a straight and symmetric wing. 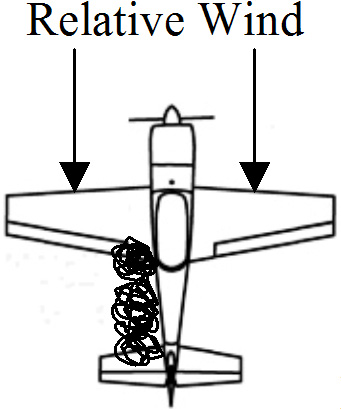 As we all learned in ground school, most straight-winged aircraft are designed to stall at the wing root, which gives a couple of good benefits. First, the approach-to-stall at the wing root gives us an aerodynamic stall warning as the turbulent air hits the elevator. Second, during this approach-to-stall, the wingtips are relatively unaffected, keeping the ailerons somewhat effective. But what happens to our straight-wing airplane if we introduce a slip or skid by using the rudder? Do the stall characteristics change? I want to answer this question by first looking at the stall characteristics of a swept wing.
Where does a swept wing stall? It stalls at the tip of the wing, because the stall generally occurs perpendicular to the relative wind (see Diagram 2 below). But how does this affect what we feel in the cockpit? Since the approach-to-stall starts at the tip, there will be no turbulent airflow over the elevator, hence no warning on the yoke/stick. This is why most high performance jets will install an artificial stall warning system called a “stick shaker.” This system is basically a vibrator attached to the yoke that activates based on approach-to-stall Angle of Attack (AOA).You would also lose aileron authority much more quickly since the stall is beginning out on the wing near the ailerons.

OK, I hear the obvious question ringing in my ear. “This is all great stuff, MO, but what does this have to do with me?” Well, I’m glad you asked! As we yaw our straight-winged aircraft, we cause the wing to slide to a diagonal view with respect to the relative wind as you can see in the diagram below, making it behave more like a swept wing aerodynamically. 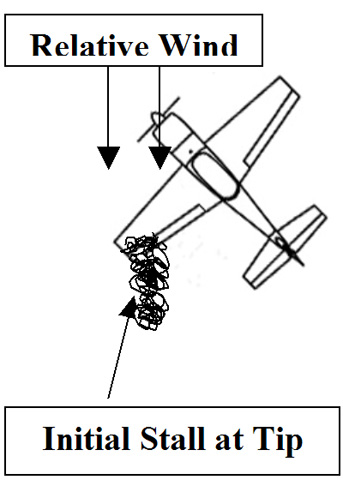 What is normally a straight wing in coordinated flight has now taken on the characteristics of a swept wing. And if the wing tip stalls first, will you get the normal approach-to-stall buffet on your elevator? NO! What about the aileron effectiveness in the approach-to-stall that you’re used to? Will it still be as effective? NO! Also, look at the forward (right) wing in the above diagram. Will it stall at the same time as the aft (left) wing? NO! But is this really that important for the straight-wing pilot? Most definitely YES! But to get to the bottom of this situation, we first have to look at the effects of roll and AOA on the lift characteristics of a wing in normal flight (unstalled). 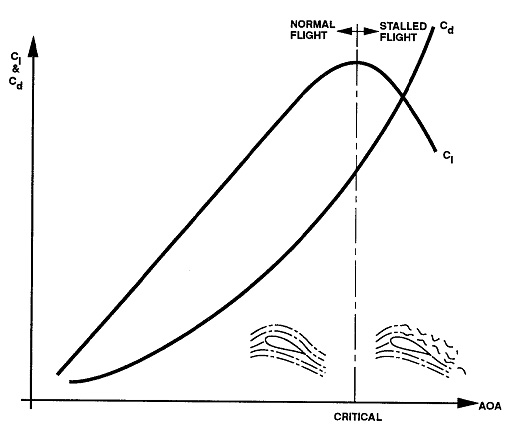 So, how does a rolling moment affect AOA on the wings of an normally flying aircraft? Diagram 5 below shows that with a left roll, the left wing is pushed down into the relative wind (which is relative, by the way), and effectively increases the AOA on that wing. The right wing moves away from the relative wind, effectively decreasing the AOA on the right wing. Since we are in normal flight, increased AOA means more lift (see Lift/Drag chart Diagram 4), and thus the left roll stops due to the increased lift, then reverses. The aerodynamic principle involved here is positive static stability, where a roll or yaw input is positively dampened back to stable flight. I will label this Positive Roll Damping. 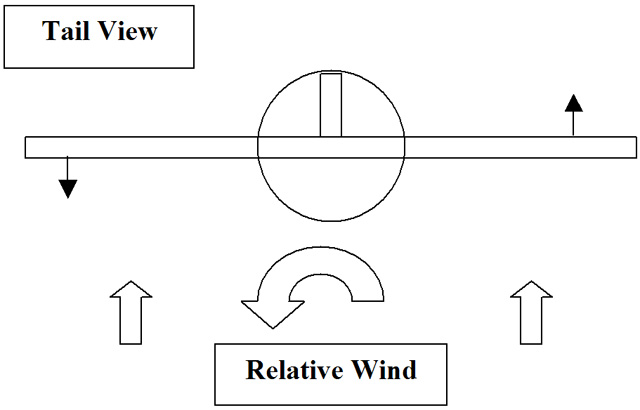 But what happens when a rolling moment is induced during stalled flight? Diagram 5 again shows that with a left roll, the left wing is pushed down into the relative wind and still increases the AOA on that wing. The right wing moves away from the relative wind, also still decreasing the AOA on the right wing. But since now we are in stalled flight, increased AOA means less lift (remember the Lift/Drag chart again?), and thus the left rolling moment will continue due to the decreased lift and will continue to roll even though the input that caused the roll is removed. The problem is that the uneven lift is now caused by the differential in AOA on the stalled side of the Lift/Drag curve. I will label this aerodynamic event as “Negative Roll Damping,” since the roll will not be “dampened” out. Now, let’s apply what we’ve just learned to our mishap analysis.
From the accident report, I can surmise that the aircraft was in a left turn to final. As the pilot put in skidding (left) rudder to make the tight turn, the left (receding wing) probably stalled while the right (advancing wing) was still flying. Now enter Negative Roll Damping! The uneven lift due to Negative Roll Damping would have caused a rapid rolling moment to the left, in the direction of applied rudder. Once the roll started, it would have continued despite the removal of the left rudder input that caused the roll. The quickest way for the pilot to correct this left rolling moment would have been to push directly forward on the yoke, which would have decreased the AOA. The decreased AOA would have put the aircraft below stalled AOA and put the aircraft back into normal, unstalled flight and immediately stopped the roll because of Positive Roll Damping, albeit in a steep bank angle. The pilot could then have rolled the aircraft back to level flight with the ailerons and recovered from the dive, altitude permitting.
If you’ve never experienced an uncoordinated stall, you should definitely see one with an instructor who has expertise in this area. Did I mention that we specialize in this area at APS Training? We spend a great amount of time and effort at putting you in these upset situations and getting you comfortable with recovery procedures that most likely would normally go against your natural reactions. Most pilots initially react to Negative Roll Damping by trying to use ailerons to correct, which can aggravate the roll opposite the desired direction. But that is another article unto itself! Until then, fly safe and keep the wheels down (except when practicing uncoordinated stalls!).