Evolving guidelines aim to correct deficiencies in methods of training for airplane upset prevention and recovery.

The framework also addresses seven deficiencies that we outline in this article to help mitigate the persistent, complex and lethal problem of loss of control in-flight (LOC-I). Loss of control can be a precursor to, or the result of, an airplane upset. 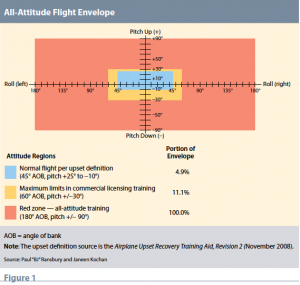 The geometric pitch and bank components of the definition can be plotted as a blue region representing the normal flight environment (Figure 1). Disregarding airspeed in the definition for the moment, the vast majority of commercial pilots tend to spend more than 99 percent of their flying careers within these tight blue-region confines, which represent less than 5 percent of the all-attitude flight envelope. In rare instances during commercial pilot licensing training, and perhaps during unusual attitude training in the simulator, pilots delve into Figure 1’s yellow region, up to 30 degrees of pitch and 60 degrees of bank, which represents the widely accepted maximum pitch and bank limitations of commercial licensing training. This yellow region represents barely more than 11 percent of the all-attitude flight envelope.

Deficiency No. 1, Unfounded Confidence. One faulty assumption by pilots is that their day-in, day-out expertise in the blue region will give them the skills, discipline and awareness necessary to prevent or recover from an airplane upset event. An upset event that is rapidly hurtling out of the blue region, through the yellow region and into the last region we call the all-attitude red zone can present unexpected, unfamiliar and sometimes violent situations that can rapidly degrade a pilot’s ability to prevent the escalating LOC-I condition or to effectively recover.

What does the reference to inappropriate airspeeds in the upset definition mean exactly? Similar to plotting data that represent the pitch-bank environment, we can graphically represent on the coefficient of lift curve a plot where pilots are only regularly exposed to certain portions of the speed envelope 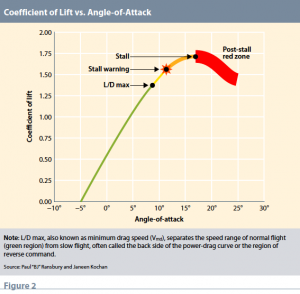 (Figure 2). With effects of aerodynamic loading aside, the typical 1-g experience of pilots (that is, one times standard gravitational acceleration) is shown by the green region of the curve proceeding from the bottom of the chart up to the L/D max angle-of-attack (AOA), the lowest point on the total drag curve.

This region of speed stability is where pilots spend almost their entire flying career. Pilots are only rarely exposed to the yellow region of the curve that proceeds up from L/D max AOA to the stall warning AOA. In speed terms, in a 1-g flight condition, the stall warning AOA is usually 5 kt to 10 kt faster than the published 1-g stall speed. The yellow region is generally only experienced intentionally by commercial pilots when practicing stall prevention training by initiating recovery at the first indication of the stall.

Up to this point in the speed/AOA discussion, pilots have a measured capability to operate in these areas. Unfortunately, most pilots’ ability to deal with events further on the curve is noticeably deficient. Nearly 50 percent of fatal LOC-I accidents are due to the aerodynamic stall. That means that pilots, for a variety of reasons, do not always effectively remain below the stall warning AOA/airspeed.

Historically, in stall prevention training at the commercial level, pilots have been repeatedly taught to minimize altitude loss, and this has been a criterion of performance evaluation (ASW, 11/10, p. 40). This precept is valid until pilots are faced with an actual stall, when they have maneuvered the airplane beyond the yellow region, through the orange region and into the airspeed/AOA red zone of the coefficient of lift curve.

Once at the stall, a pilot often reverts to what was taught in training: To recover with a minimum loss of altitude. This is the exact opposite of what should be emphasized: To reduce the AOA first and foremost. The aerodynamic stall is an airplane upset by definition, and these pilot errors perpetuate stalls, which can lead to serious airplane upsets.

Deficiency No. 2: Improper Stall Recovery. The obsolete paradigm of minimizing altitude loss has generated situations in which pilots continued to pull back on the control column, further increasing AOA in the stall and immersing themselves in the red zone. Several major challenges are presented here to these pilots. These challenges may never have been experienced, and pilots have not been consistently trained on how to exit from this deadly region. Other than rare exposures to the peak of the lift curve during initial flight training, this red zone is not often visited.

The risk of a fatal accident increases in proportion to duration and depth of exposure to the red zones. Myriad warning cues — the auditory, visual, tactile control feedback, motion cueing and other combinations of sensory feedback — also flood the pilot’s senses, causing extremes of psychological states such as stress and panic and of physiological states such as spatial disorientation. Adding insult to injury, piloting skills suitable for the blue and green regions of Figures 1 and 2 rapidly decrease in their effectiveness during the escalating upset event. Counter-intuitive, corrective control inputs are often required to reliably recover the airplane to the “normal flight” regions of the commercial licensing flight envelope. Without proper UPRT, it is doubtful the pilot will recover.

If these red zones are not being addressed adequately by traditional training, where do we start as an aviation industry to significantly mitigate LOC-I? Mitigation begins with ensuring that industry-approved UPRT programs establish a sound foundation from which situational awareness, insight, knowledge, and eventually, skills can be reliably developed in the all-attitude, all-envelope environment.

Industry-approved, Web-based training tools can assist as powerful academic resources. At the outset, however, it must be emphasized that LOC-I mitigation is not an academics-only challenge. Academic preparation offers limited mitigation as a standalone intervention. Yet, academics combined with practical, hands-on experience under a quality-assured program can have significant and lasting UPRT skill-development benefits.

A pilot’s unfamiliarity with the all-attitude, all-envelope environment can be overcome efficiently by imparting a significant portion of the awareness skills early in initial UPRT sessions. These initial sessions are best accomplished in an aerobatic-capable airplane with expert UPRT instructors, preferably before beginning airline flying.

UPRT instructors must cautiously build from the familiar to the unfamiliar to effectively bridge knowledge and experience gaps. Extensive experience shows that early focus on awareness of AOA, load, lift vector, coordination and energy management, combined with real-time feedback on the negative consequences of their mismanagement of those elements, helps trainees to gain trust and confidence in the training platform, the instructor pilot, and the building-block design of the course of UPRT training.

Teaching the fundamental concepts and core skills in a progressive, non-threatening manner enhances the trainee’s situational awareness at a rate that allows knowledge, skills and abilities to be internalized — enhancing long-term retention. When effectively delivered, this initial UPRT indoctrination comprehensively prepares the pilot for type-specific UPRT differences training ideally provided by the airline in the simulator.

The focus of UPRT must be placed squarely and firmly on upset prevention through enhanced pilot awareness. Two general types of this training can be clearly defined. One type stresses time-favorable actions through effective aeronautical decision making (ADM), and the other type stresses time-critical actions to counter an escalating upset before it develops beyond certain thresholds. UPRT must address both of these prevention concepts. Time-favorable ADM upset prevention, typically on the order of several minutes or even hours, involves environmental analysis, upset risk awareness, resource management and breaking the error chain through sound judgment.

Deficiency No. 3: Pilot Over-reaction. As the time frame for stall/upset response compresses, typically onto the scale of seconds or fractions of a second, the pilot’s challenges become quite different from time-favorable ADM. When startled by a rapid-onset upset event, implementing the correct, time-sensitive control inputs to counter the escalating condition is often the most difficult aspect of prevention in UPRT. For the psychological and physiological reasons noted, pilots faced with rapid-onset airplane upset events tend to over-react to situations without dedicated training. Pilots in real upsets have been observed making the situation worse, sometimes unrecoverable, or causing airplane structural failure in rare instances. Over-reaction must be addressed, and this is another critical LOC-I mitigation from UPRT.

Once an airplane’s flight condition unintentionally exceeds a certain level of severity, the pilot must recognize the necessity of intervention. As the situation transitions from the prevention phase to the recovery phase defined by the above airplane upset parameters — or the prevention phase seemingly has been skipped entirely — the pilot must take immediate corrective action.

Deficiency No. 4: Primary/Exclusive Recovery Focus. Many training providers treat the upset recovery phase as the primary, or exclusive, focus of their version of UPRT. To be clear, a comprehensively addressed recovery phase has tremendous value in enhancing the trainee’s ability to contain real-world startle factor; to properly use the primary controls of all-attitude, all-envelope flight; and to enhance situational awareness of the event. Nevertheless, the core element of UPRT must be upset prevention with the understanding that this can be significantly augmented by integrating thorough and comprehensive recovery training.

Deficiency No. 5, Absence of Startle Factor. Some UPRT programs fail to adequately address the startle factor. Imparting UPRT skill sets to trainees without startle training does not reliably enable them to recover during the mentally and physically demanding challenge of an actual airplane upset. However, training providers must be extra cautious in how unannounced events are integrated into UPRT. Inappropriately subjecting trainees to dramatic in-flight or simulated events — those beyond their skill level to resolve correctly — can have long-term negative consequences in UPRT skill development.

Deficiency No. 6, Simulator Limitations. Presently, the required magnitude, quality and relevance of startle factor training for UPRT cannot be fully accomplished exclusively through ground-based simulation. Appropriate UPRT training in all-attitude, aerobatic-capable airplanes readily immerses the trainee in dynamic surprise/startle experiences that are recognized in scientific research as unique and necessary.

Deficiency No. 7, Problematic CRM. Ensuring that CRM optimizes a flight crew’s upset response has been particularly challenging to the global community of UPRT specialists — for example, the concerns if only one flight crewmember has completed UPRT.

The presence of an untrained crewmember in this same crew arguably could have dire consequences in an upset event due to flight control interference. In LOC-I scenarios, the flight crew must immediately communicate and confirm the situation; manage the automation and transfer control (if necessary) to the pilot with the most situational awareness; work together through standardized interactions to mutually enhance awareness of the dynamic flight condition; and apply correct, timely control manipulation.

Paul “BJ” Ransbury, president and chief flight instructor (CFI) of APS Emergency Maneuver Training, and three-time recipient of the master CFI–aerobatic designation from the aviation education industry’s Master Instructor Program, is a founder and vice president–global integration of the Upset Prevention and Recovery Training Association <uprta.org>, a former Airbus A320 airline pilot and a former F/A-18 fighter pilot and tactics instructor. He also is co-leader of the upset analysis and development team of the Royal Aeronautical Society’s International Committee for Aviation Training in Extended Envelopes (ICATEE). Janeen Kochan, Ph.D., is a human factors scientist, designated pilot examiner and instructor pilot at Aviation Research, Training and Services; a former airline captain; and an author of research reports on pilot training for the mitigation of startle/surprise effects. She is also a member of ICATEE. Their original paper is available at <apstraining.com/uprt-deficits>.