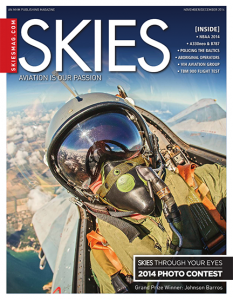 APS is now a regular contributor to Skies Magazine. In a series of articles focused on the benefits of Upset Prevention and Recovery Training (UPRT) and mitigating the threat of loss of control in-flight (LOC-I), we’ll explore a wide variety of topics important to aviation safety.
While these topics seem especially salient now, due to increased news coverage of recent accidents involving aircraft and upcoming FAA mandates regarding UPRT for airline pilots, LOC-I has been the leading cause of aviation fatalities for decades. We are thrilled to take advantage of an additional opportunity to continue getting the word out and engaging pilots in all aviation sectors with valuable information on closing the training gaps and taking the necessary steps to reduce LOC-I risk.
Here’s the links to our recent articles in case you missed them:

You can find our next article, “Technology in Airline Jet Upset Training,” in the May/June issue of Skies Magazine. The articles can also be found online at apstraining.com/skies/.
Official Press Release:

Aviation Performance Solutions (APS), an Arizona-based flight training organization, has announced an agreement with Skies Magazine to deliver a series of educational aviation articles about upset prevention and recovery training (UPRT) and other methods of combating loss of control in-flight (LOC-I). The series addresses a diverse range of subjects, including human factors, methods of instruction, and leading-edge aviation training technologies. The March/April 2015 issue of Skies addresses the critical role of manual handling skills in preparing pilots to resolve unusual in-flight conditions and airplane upsets.
According to a report issued by the Commercial Aviation Safety Team in August 2014, LOC-I is the leading cause of fatalities in commercial aviation worldwide. The National Transportation Safety Board, National Business Aviation Association and International Civil Aviation Authority have all placed LOC-I on their 2015 “most wanted” lists of safety concerns.
“Skies is dedicated to keeping its readers at the forefront of advancements in aviation at all levels,” said Mike Reyno, publisher and owner of Skies Magazine. “The broad spectrum of expertise at APS in the domain of loss of control in-flight training solutions promises a powerful and informative series on this leading safety concern.” Readers should look for a new article by APS in each edition of Skies, which is published six times per year…Read the full APS/Skies Magazine press release here.