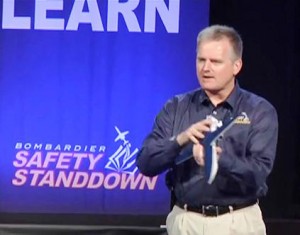 Thursday, October 8, 2015
9:00 – 10:00 (CDT) (Recorded Below)
Presented By
Paul “BJ” Ransbury
President
Aviation Performance Solutions
This presentation delivered at the Bombardier Safety Standdown 2015 begins with an update on the rapid progression of industry initiatives and regulatory advancements being implemented to reduce the risk of loss of control in-flight. Then, the influence of hazardous mental attitudes are addressed with respect to airplane state awareness during routine flight operations leading to unintended consequences. Distraction management integrated with enhanced flight path awareness keeps pilots and crews focused on what matters when it matters most. Complacency in combination with decreased attitude, airplane state and flight envelope awareness can quickly place pilots in unfamiliar territory. Regaining situational awareness, positive flight path control and task prioritization can be learned systematically even in a time-critical life-threatening crisis.

Clarifying Notes on this Presentation