The following excerpts are from the Executive summary of the USAF Aircraft Accident Investigation Board Report:

“On 27 April 2013, , an MC-12W impacted terrain 110 nautical miles northeast of Kandahar Airfield in Afghanistan while on a combat intelligence, surveillance, and reconnaissance (ISR) mission. The four crewmembers on board were killed instantly on impact and the Aircraft was destroyed. The aircraft had encountered deteriorating weather in the orbit and was climbing from 20,000 to 23,000 feet mean sea level (MSL) to fly above the weather when the mishap occurred. In addition, the crew had found an enemy combatant and was in the process of adjusting their orbit to enhance mission success. The board president found, by clear and convincing evidence, the cause of the mishap was a stall due to insufficient airspeed, while in a climbing left turn, which developed into a left spin followed quickly by a left spiral, from which the crew was unable to recover.” 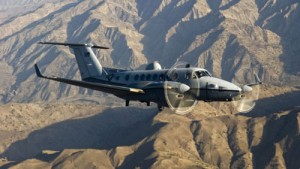 Extended operations at loitering power settings to increase endurance place an airplane at lower airspeeds, and consequently higher angles of attack. This means that the airplane spends long periods of time at an elevated angle of attack. This presents a reduction in the margin of safety from operations at normal cruise airspeeds. The effects of turbulence, pilot mishandling, ice accumulation, or automation mismanagement can all result in an unanticipated aerodynamic stall.

Normal operations require little maneuvering in cruise flight to get from takeoff point to destination. Often ISR operations can involve near continuous orbiting, again increasing angle of attack in level turning flight. Combined with slower speeds this can further reduce the available angle of attack margin.

ISR operations can involve coordination on multiple frequencies, meeting the needs of sensor operations, tactical considerations and other requirements that can compete with the demands of aircraft control and reduce aerodynamic situational awareness.

In order to satisfy mission requirements to keep eyes on target, capture signals intelligence or other mission related factors, ISR platforms can be pushed to the edges of the envelope. This can create situations in which accomplishing the mission conflicts with the desire to keep the aircraft in the center of the aerodynamic envelope.

Mitigating the Threat of Loss of Control

All of the elements listed above were present in the accident referenced. APS training focuses on not only recognizing conditions which can set an airplane on a course out of the normal flight envelope, but on the specialized proficiency necessary to safely and effectively recover from unexpected airplane upset situations and avoid an aircraft loss of control. The training provided can reduce the threat of a broad range of accidents, not just the accident type referenced.

APS is the largest provider of  Upset Prevention and Recovery Training (UPRT) to ISR systems operators in the world today. Army fixed-wing and government contractor pilots operating MC-12, Dash 7, Dash 8, and other airframes have come to rely on the increase in knowledge and skill that can help to mitigate the elevated risks that are present in ISR operations. The same additional knowledge and skills that help to reduce risks for ISR operators can help you reduce the threat of aircraft upsets in your operations, whatever the demands of your flying.