Reproduced with Permission by APS

It has often been said that there is no substitute for experience but I am living proof that training is sometimes the only thing that keeps you alive long enough to benefit from the experience. 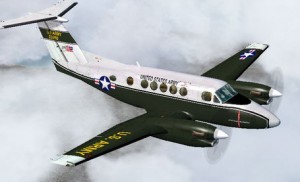 Like so many other stories, it started with a normal training mission in one of our C-12 aircraft (US Army version of the Beechcraft King Air). No missions had come down for the day so another pilot and I decided to take one of the aircraft out for an afternoon flight. He was our newest PIC but he didn’t have a lot of flight time in our local area so I pulled up a flight plan that took us to some lesser used airports that he had never been to. We checked over our Dash One (US Army weather briefing) and everything looked fine for an early winter flight in the northwest – low ceilings and nothing worse than light rime in the descents. My co-pilot was the acting PIC for the flight and he chose to fly right seat in order to work on his cockpit management.

The flight en route to our first destination was uneventful and we enjoyed the views of mountain tops piercing the low cloud decks below us. The plan, as approved by ATC, was to do the VOR approach followed by the published missed into holding. This would give us a chance to practice some maneuvers we rarely do and once we were in holding we could pick up our clearance to our next airport. We entered the clouds at about 7000’MSL in the descent and when we leveled out at MDA we were right in the cloud base. During the descent I noticed some trace rime ice on the wings. We had turned on all of our ice protection equipment, and neither of us were the least bit concerned. At that time of year in the Northwest, it is a rare flight to not see at least some ice. We hit our missed approach point, accomplished the go-around procedure, had the auto-pilot back on, and in the climb before we even had to start our turn back out to holding. We were feeling pretty good about things as the aircraft leveled out at 6000’MSL and turned towards the VOR, which was our holding point. The plan was to enter holding, do one pattern, pick up our clearance and then depart.

I set the power to our normal maneuver cruising speed of 160kts IAS and glanced out the window to check for ice. I noticed what looked like a thin film of ice on the boots and decided to inflate the ice boots to see if I could dislodge it. Based on my previous experience with that amount of ice I didn’t think it would do much more than just fracture with most of the ice staying on the boot. To my surprise when I hit the boot the ice exploded off, leaving the boot completely clear. I quickly looked at the OAT and saw it was -4C. I glanced up at the windshield and noticed just a couple of small clear ice streaks on the outer edges. I knew we were picking up some ice but I was used to ice and even though it seemed different this time I had no idea the severity of it. In hindsight I should have done two things at that point – disengaged the autopilot and requested an immediate climb, neither of which I did. I was concerned enough that I told the PIC we were picking up ice and that instead of doing a turn in holding, we needed to get our clearance and head out. He agreed and for the next minute or so we were focused on getting the clearance and punching it into the FMS.

I knew we were still in icing conditions but in over 1000 hrs of Fixed Wing time I had learned (the vast majority of my experience has been in rime ice) that even in moderate icing conditions, it takes several minutes before enough ice builds up to where you can effectively activate the boots. In addition, I associated heavy ice with an obscured windshield and that wasn’t the case this time. I lifted my head up from looking at the FMS and noticed that our airspeed was down to 140kts IAS. That is when everything started to go wrong and time slowed down. I doubt the following actions encompassed much more than a minute but it was so hectic it took us some time afterwards to piece together what happened. This is our best estimate of the sequence of events.

As soon as I saw the airspeed, and while my brain was still trying to process it, the aircraft started to shudder. It wasn’t the buffeting that I had experienced in the simulator or anything like the stall indications we had in flight school flying the Cessna 182 – it was violent and aggressive. I knew that our stall speed in our current configuration was about 100kts, so even though we were in ice, my first thought was that something had come loose on one of the wings. I asked my co-pilot to check his wing while I added power to about 80% to keep from slowing down any more. Neither of us saw anything wrong with the wings except for some ice on the leading edge which my co-pilot cleared by hitting the boots again. Somewhere around this time I finally punched off the autopilot and struggled to control the aircraft. It started to pitch more violently and I basically had no control through the ailerons. The airspeed continued to decrease until at about 120kts IAS the aircraft pitched up then nosed over and rolled to the right. The warnings started to sound “bank angle, bank angle” as we exceeded 60 degrees and my attitude indicator was rapidly turning more brown than blue. It finally flashed through my thick skull that no matter what the airspeed said we were in a full-on stall that was rapidly turning into a spin. Because of the onset characteristics, it was clear to me that this was not a tailplane stall. 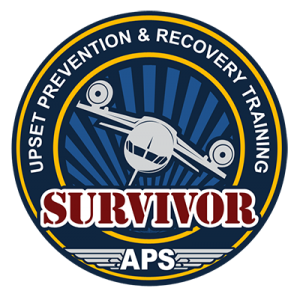 In spite of all the clues I had missed up to this point, this is where training saved our lives and the aircraft. The previous year I had completed a weeklong upset prevention and recovery course (UPRT) at APS based in Phoenix, AZ in which they beat it into us that you have to aggressively and correctly reduce angle of attack in a main wing stall or you may not recover. So, even though we were descending to the ground at 3000FPM at a bank angle greater than 70 degrees, my training took over and I even yelled out the mnemonic for the strategy as I shoved the yoke forward and pulled the power back. I made sure we were in trim and, within a couple of seconds, I could once again feel feedback in the ailerons so I rolled the aircraft upright and started to pull out of the dive. I told my co-pilot to give me full power and props to high but as soon as we slowed to 140kts in the climb it entered a secondary stall and I had to lower the nose and build up airspeed in a slight descent before pulling up into a climb again. Although I thought climbing may not be possible depending upon the amount of ice accumulated (APS addresses this consideration in training where stabilizing in a descent or level flight in some situations may be the only option), it was necessary to at least investigate the possibility of climbing due to the tremendous altitude loss and terrain. While I continued this step climb maneuver to gain altitude my co-pilot was activating the boots to ensure they stayed clear. The problem was that much of the ice had accreted aft of the protected area and we could do nothing about it. We were in classic super cooled water droplets that would hit our leading edge and then flow back beyond the boot before freezing. We broke out of the clouds at 7000’MSL and it wasn’t long before the sunlight began to remove the ice. Once we started breathing again and stopped shaking, we decided that was enough training for one day and headed for home.

We learned several valuable lessons from that experience. First, if something doesn’t look right then react to it, don’t assume it is the same old thing. I was comfortable flying in and reacting to ice but I had never seen ice explode off the boot like that. I should have picked up on the fact that there was a lot more ice than what I could see and that these were not normal conditions. Based on the time frame from when I first noticed the ice until the stall (less than 3 minutes) I believe we were in severe clear ice which I had never experienced. Along with that, and in spite of the lack of a stall horn, I likely could have, in hindsight, recognized the main wing stall sooner. Rather than reacting to the clear aerodynamic indications of a main wing stall, I convinced myself that it had to be something else because we were too fast to stall (in my mind) and it was much more violent than any buffeting I had experienced before. Finally, the most important takeaway is that training saves lives. I had a great co-pilot and crew coordination was instrumental in our survival but it is highly unlikely that I would have recovered that aircraft without upset prevention and recovery training with APS. The natural reaction of trying to over aggressively pull out of the dive, especially with the reduced stalling angle of attack, could have quickly put us into a spin and no one, to my knowledge, has recovered a C-12 from a spin in US Army line operations. We train for the worst-case scenario to give us the tools to live through it in the hope we will never have to. In the coming months and years there will be temptations to cut funding for programs like UPRT but can we really afford to?

Active-Duty US Army Pilot, Washington State
(name and unit withheld at the request of the author)