Once a year (usually around September or October), there is a new set of statistics released by the Commercial Aviation Safety Team (CAST) through Boeing. This annual report provides a compilation of all worldwide commercial airline accidents since 1959 involving western built civil aircraft, with a focus on the most recent ten year period. Because of the time required to analyze data, each report ends with the prior year. The current report covers the time frame from 1959 to 2014, with a focus on the ten year period from 2005-2014. What this year’s report shows is significant. 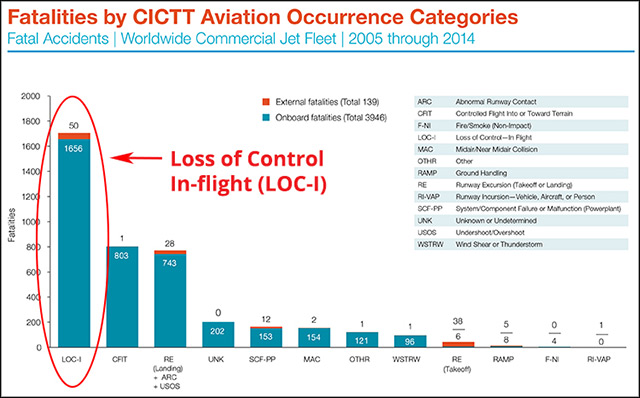 The ten year period of last year’s report showed 4,547 fatalities of which 1,493 – or 32.8% – were categorized as Loss of Control In-flight (LOC-I). This year’s report shows an increase of 125 LOC-I related fatalities to 1,648 over the most recent ten year period. What should get our attention even more though, is that during that same ten year period there was an overall reduction in fatalities by 278, to 4,269 total airline fatalities. So while airline travel overall is getting safer, the threat of LOC-I in flight is increasing both in absolute terms and as a percentage of overall fatalities; we have gone from 32.8% to 38.6% of all fatalities being related to LOC-I. Nearly two out of every five airline fatalities are now as a result of LOC-I. 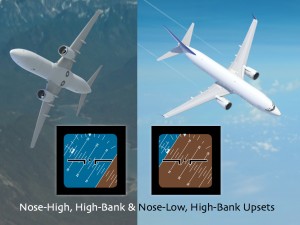 During the indicated ten-year period, the risk from the second leading causal factor, Controlled Flight Into Terrain (CFIT) came down 1% from the previous report: from 23.7% down to 22.7% of all fatalities. A little less than ten years ago, CFIT led the list of causes attributed to commercial airline fatalities. Because of the success in reducing the threat of CFIT, a comparison with LOC-I is helpful. The reduction in CFIT was primarily the result of technological means such as Terrain Awareness and Warning Systems (TAWS), Ground Proximity Warning Systems (GPWS), and improved cockpit displays. Emerging technologies such as Enhanced Vision and Synthetic Vision promise to further reduce deaths due to CFIT.
Unlike CFIT, LOC-I is a more difficult to defeat through technological means alone. Because of the scale of the LOC-I threat, all opportunities for mitigation should be pursued, including improvements in technology. Part of the reason behind this year’s increase in ten-year LOC-I fatalities should caution us on the limits of solving this problem through technical means alone. In June of 2009, Air France 447 crashed while flying from Brazil to France. The aircraft was equipped with one of the best technologies available for reducing aircraft upsets and the resulting LOC-I: a fly-by-wire flight control system incorporating flight envelope protections. It was not successful in preventing the accident and resulting fatalities.
There is something else that is disturbing upon closer inspection of these two reports. The previous ten year period included a causal factor named “System Component Failures, Non-Powerplant” (SCF-NP). This category includes items such as flight control or autopilot failures whose failures can evolve into a LOC-I event. That has become a less statistically significant category on the latest ten-year period and fell off of the chart.
The fact that this (SCF-NP) is less of a factor means that a smaller number of LOC-I accidents are coming from systems failures. In other words, the problem of LOC-I is becoming less about the airplane and more about pilots themselves.
Despite the technology employed, pilots in command will always be the last defense against LOC-I. In order to assist them in that responsibility, all professional pilots should be provided with elements of Upset Prevention and Recovery Training, as delivered at APS.

What Is UPRT?
The Biology of an Aircraft Upset Event and Loss of Control