Summary – As we consider Jet Upset Training, consider that flight training in simulators for both airlines and corporate pilots includes stalls and unusual attitudes that would be unsafe to practice in the actual aircraft.  Most of the training done in this area (a sub-set of Upset Prevention and Recovery Training) has traditionally been accomplished with only one pilot participating, as opposed to being performed as a crew. It is also typically completed as a stand alone event (maneuver based training), as opposed to being part of a normal flow of events during training (scenario based training).  In actual unexpected events, upsets — which include both stalls and unusual attitudes — occur as a surprise during the execution of another portion of a flight and should include both crew members working in a coordinated manner to resolve the problem.  Therefore, we should train these events as they actually happen and have both pilots practice completing their role in an upset recovery. Crew Resource Management (CRM) is utilized in other simulator training events, and upset recoveries should also be trained using the principles of CRM. 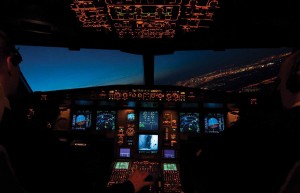 If an airliner encounters an engine failure on takeoff, it is likely that the crew will respond in a swift and coordinated manner. This is a situation that is practiced repeatedly in flight simulators, involving an intricate choreography of words and actions between crewmembers. An upset event is defined as an airplane in flight unintentionally exceeding the parameters normally experienced in line operations or training. It is typically indicated by the nose of the airplane being more than 25 degrees above or more than 10 degrees below the horizon, bank angles greater than 45 degrees, or within those parameters but flying at airspeeds inappropriate for the flight conditions.

Precursor to Loss of Control In-flight

An airplane upset is a precursor condition to a Loss of Control In-flight (LOC-I) event. LOC-I, a situation where the airplane is generally considered to be no longer controllable by the crew, is the leading cause of fatalities in all categories of aviation. This situation poses a unique challenge since pilots typically don’t practice recoveries from airplane upset situations as regularly as many other emergencies; nor do they routinely practice the critical coordination between crewmembers that is performed during other emergencies. These facts indicate a disconnect between the LOC-I threat and how we currently train pilots to respond to crises.

To reduce LOC-I accidents, the International Civil Aviation Organization (ICAO) has recommended that Upset Prevention and Recovery Training (UPRT) be incorporated into Commercial and Airline Transport Pilot licensing training. UPRT is increasingly integrated into flight training through academics, improved simulator training, and in-aircraft instruction. In the past, pilot training regulations addressed training for various types of upset conditions separately, such as aerodynamic stalls and unusual attitude training. However, there is nothing physically preventing pilots from encountering both conditions simultaneously, which can lead to crew confusion in a time-critical, life-threatening situation.

The new ICAO UPRT recommendations are directed primarily towards professional pilots (airlines or commercial air carriers) working in multicrew environments. It is logical to assume then that CRM and multi-crew operations should be considered when conducting UPRT.

ICAO guidance recommends a building block approach in a pilot’s career path that begins with academic training and then progresses to practical training, both in an aircraft and in a flight simulator. Historically, unusual attitudes and, to some extent stalls, have been taught and practiced primarily as individual maneuvers (maneuver-based training). ICAO recommends that simulator training include a multi-crew, “scenario-based” CRM environment, which allows the crew to practice working together in life-threatening upset events, as they might occur in the real world. Inclusion of CRM in upset prevention and recovery enhances active monitoring skills by the Pilot Monitoring. The non-flying pilot becomes a better “lookout” for factors indicating an impending upset event. Better awareness and prevention before an upset event develops should be the objective of any
UPRT program.

CRM integration for in-simulator jet upset training has historically been very narrowly utilized in the aviation industry. Pilots have been trained for many years in windshear events (one form of an airplane upset) as “crew” events in scenario-based training. This approach should be expanded to include other forms of upset events. UPRT CRM standardization will enhance crew efficiency. A crew’s
training can encourage the use of standard terminology during unexpected upset events as it is during other inflight emergencies. For instance, IATA, the International Air Transport Association, has recommended the use of terms such as “Upset Nose High (or Nose Low), Recover,” but there is still no standard widely-utilized terminology. Using such terminology immediately focuses the crew’s attention on the task of recovering the aircraft.

Properly managing the airplane’s flight path is always a top priority for the flightcrew. CRM principles dictate that the response to an upset should be proportional to the severity of the situation. A crew experiencing a timecritical, life-threatening upset event cannot afford to over-react or react without proper coordination. Standardized verbal responses can be categorized in terms of prevention or recovery, with prevention occurring before the upset reaches certain defined parameters, while recovery describes actions taken after upset parameters have been exceeded. Responding to a developing situation that has not yet exceeded the parameters that define an upset, but is moving in that direction, might require simply making the other crewmember aware of what is transpiring. This early response prevents an upset condition before it can progress to a LOC-I.

Further escalation of an upset event might require emphatic direction from the other crewmember, with specific actions to prevent further development into loss of control. Finally, it may become necessary for the other crewmember to intervene and actually take control of the aircraft to recover and prevent a situation where the airplane is truly out of control.
Some upsets can deteriorate very rapidly and don’t afford time for communications to be sent, received and comprehended. For some airlines, the Pilot Flying will always retain control; for other carriers, the policy is for the first person recognizing the upset situation to be the one to accomplish the recovery. If the situation demands immediate intervention, any transfer of control must be clearly announced. Using standardized call outs and ongoing communication informs the other crewmember of exactly what is transpiring and keeps both crewmembers in the loop. Consistent, industry-standardized UPRT is essential in developing an organized crew response to an escalating upset event. Until that happens, flight departments should develop their own jet upset training standards to be applied in an airplane upset event.

The Future of CRM

Increasing emphasis in mitigating LOC-I stems from an appreciation for the role of the Pilot Monitoring playing a larger part in dealing with distractions or other issues that take the pilot actively flying (or responsible for the automation being used) away from the proper management of the airplane’s flight path. Better education, active participation by both crewmembers and integration of CRM principles should ultimately lead to reduced LOC-I accidents through enhanced understanding, awareness, prevention and recovery skills. By training pilots to use CRM principles during jet upset training and in airplane upsets as in other in-flight emergencies, flight crews can maximize their approach to defeating LOC-I, the greatest threat they face.