On 28 May 2015, the president of Aviation Performance Solutions LLC (APS), Paul BJ Ransbury, was honored to be the opening speaker at the Twin Cessna Flyer‘s 2015 Fly-In Convention in Colorado Springs, Colorado. Other featured speakers joining the line-up were SR-71 Blackbird pilot, Brian Shul, the Honorable Christopher Hart with the NTSB, and Dr. Paul Buza speaking on Hypoxia and the Aging Pilot. 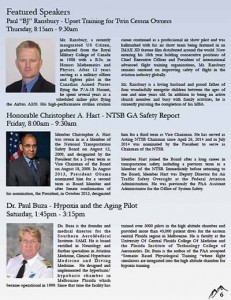 The participating Twin Cessna Flyer members were focused on safety, improving their piloting skills and getting up-to-date on advancements in a wide diversity of operational areas relevant to their use of Twin Cessnas. During the presentation on Loss of Control In-flight (LOC-I) by APS, the ~40% fatality rate due to LOC-I in commercial flight operations was shown to approximate the risk level faced by this owner group. The LOC-I presentation covered real-world Twin Cessna accidents, statistics directly relevant to the Twin Cessna pilot group and included several tips on actions that could be taken right away to reduce their LOC-I risk level.
Many participating Twin Cessna Flyer members made the important decision to pursue Upset Prevention & Recovery Training as part of their personal safety program. LOC-I training for this risk-mitigating group of Cessna pilots will take place in both Dallas and Phoenix at APS Texas and APS Arizona respectively.

It was a great honor for the APS team to be invited to speak, display and socialize with one of the industry’s most progressive and safety-focused owner/operator groups. Thank you Twin Cessna Flyers!