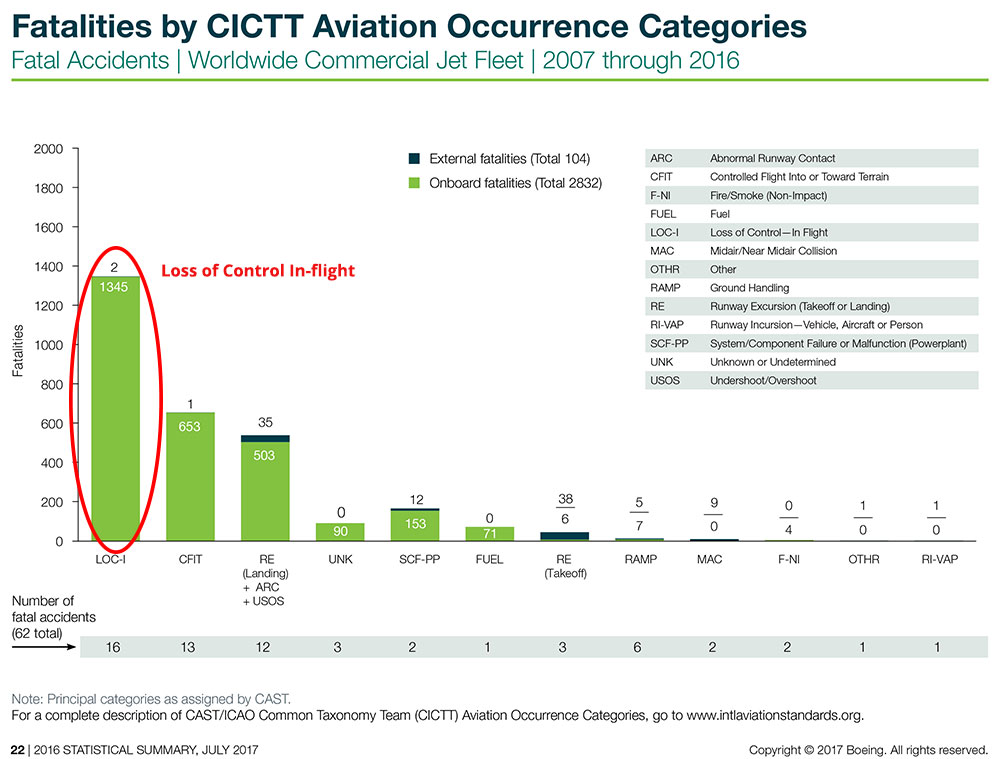 On April 24th, 2018, the NTSB devoted valuable time and attention to addressing the #1 cause of fatalities in aviation: Loss of Control In-flight (LOC-I). The NTSB and its chairman, Robert Sumwalt, applied the appropriate priority to the threat of LOC-I, devoting their effort, resources, and facilities and reaching out to notable subject matter experts in a variety of areas of flight training to speak to this persistent problem.
Many important ideas and thoughts were shared during the roundtable, and we applaud the effort to increase awareness. One key reason LOC-I continues to be such a persistent and lethal threat to aviation safety stems from misconceptions that continue to impede the quest for an effective solution that will save lives. Using the roundtable as a springboard, there are a few critical issues that deserve further consideration.
Some of the most important areas that deserve further discussion after the NTSB Roundtable are presented here:

1. A solid international consensus on the solution to LOC-I has been reached. Everyone in attendance was well aware of the ongoing problem with LOC-I, yet several important areas of significant work and study regarding LOC-I continue to be neglected or unrecognized by agencies and organizations looking into the problem. Great benefit can come from capitalizing on others who have developed effective solutions to address this problem.

In 2009, following a conference centered on LOC-I, the Royal Aeronautical Society formed a standing working group, the International Committee on Aviation Training in Extended Envelopes (ICATEE). For over 3 years this group (divided into Training and Technology subgroups) evaluated potential ways to mitigate the threat of LOC-I through training and technical means – which parallels the stated goals of the NTSB Roundtable. The technical recommendations of ICATEE formed the basis for changes to simulators slated to be instituted by US airlines prior to March of next year.

The recommendations of ICATEE, along with an Aviation Rulemaking Committee established by the FAA to address LOC-I Avoidance and Recovery Training, formed the basis for the International Civil Aviation Organization’s publication of their Manual on Aeroplane Upset Prevention and Recovery Training (UPRT). Incorporating recommendations from these two working groups, along with testimony from subject matter experts from around the world delivered at a series of meetings over several  months, ICAO changed civilian licensing standards to recommend UPRT prior to Commercial Licensing of pilots. EASA Has already instituted regulatory changes reflecting these recommendations. This important change in pilot training practices was not significantly addressed during the NTSB Roundtable.

Despite transport category aircraft having significant safety features such as fly-by-wire flight envelope protections, LOC-I still causes more fatalities in the airline sector than any other causal factor. For airplanes large and small, LOC-I accidents often come down to issues related to angle of attack or energy mismanagement. Despite the apparent differences between high speed jets and single engine piston aircraft, many aerodynamic and human factors found in accident reports are startlingly familiar.

3. Flight simulation alone is incapable of illustrating the full range of necessary aerodynamic and human factors related to LOC-I. Flight simulators are amazing tools and provide significant training advantages over aircraft in many ways, including some aspects of UPRT. However, because simulators behave and perform so realistically when conducting normal flight operations, there are two critical limitations that are often overlooked with regard to teaching outside the normal flight envelope.

One significant cause of upset events leading to LOC-I is stalls with sideslip present; slipping or skidding stalls. This aspect was covered quite well by panelists. However, the panel didn’t address the critical reality that the dynamic and non-linear aerodynamics involved in these situations are not well modeled by even the most sophisticated Level D simulators incorporating enhanced aeromodels. Stalls in slipping and skidded flight are best practiced in flight with the greater margin of safety provided by airplanes certified in the Aerobatic Category.

It is easy to miss the second significant limitation of simulators with regard to use in UPRT. In virtual scenarios in the simulator, students are just as intelligent and focused as you are reading this sentence. Unfortunately, in an unanticipated upset event the cognitive overload and physiological response pilots experience is all too often overwhelming. Structured training incorporating a building block approach in an aerobatic capable aircraft can introduce essential skills and techniques in an environment of controlled risk.  This will not only help pilots learn to cope with the threat response they will experience in an upset, it will assist in the retention of those skills if needed in that domain and build confidence in recovery skills in the future if needed.

4. Currently required licensing skills do not sufficiently address the upset domain. The majority of time during the roundtable was devoted to ways to improve pilot skills through training. Gliders, aerobatics, and tailwheel instruction were discussed, but, more importantly, training attitudes and culture were significant themes of discussion over the course of the day. In fact, there was a clear consensus that additional training was the most effective means to defeat the LOC-I threat. The concept that professionalism should not be tied to a pay check was discussed by attendees, but for Commercially-licensed pilots, professionalism is absolutely mandatory. With the responsibility for the safety of others that comes with Commercial or Air Transport Pilot privileges, a higher standard of safety is demanded.

After significant analysis, the FAA’s own Loss of Control Avoidance and Recovery Training Aviation Rulemaking Committee (LOCART ARC) made the following recommendation regarding implementing improvements to existing training practices: All pilots should receive a program of comprehensive upset prevention and recovery training (UPRT) in actual flight at the commercial pilot licensing level on light airplanes which are capable of performing the recommended maneuvers while maintaining acceptable margins of safety.

ICAO agreed with this recommendation, incorporated it in the ICAO Manual cited above, and changed their licensing recommendations accordingly. The European Aviation Safety Agency (EASA) fast-tracked these recommendations and will be putting them in place in Europe beginning next year.

An often quoted definition of insanity is “Doing the same thing over and over again and expecting different results”. The majority of the roundtable was devoted to how to improve what we are doing.  To further this conversation and continue to make strides toward mitigating the risk of LOC-I, we need to focus on incorporating existing US and International recommendations to change what we are doing to train pilots.
Summary
At the outset of the roundtable, Chairman Sumwalt and others acknowledged that all the participants at the roundtable were heroes because they were all focused on saving lives through their efforts. We agree with that sentiment, and applaud the good work of all panelists that were present. Our hope is that the significant existing body of work on LOC-I and UPRT can be utilized to more effectively prepare pilots to prevent and recover from unexpected upset events and save lives.