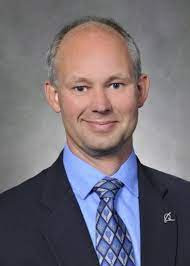 Captain Philip Adrian is a Fellow of the Royal Aeronautical Society and currently serves as the CEO of MPS, the leading Fixed Base Simulator manufacturer for the Airbus A320 and Boeing B737 series. He leads 2 factories, one in the Netherlands and one in Germany, and an innovation team in the Netherlands. MPS partners with airlines, training organizations, OEMs and TDMs to provide tailored and innovative solutions for all training needs.

Philip started as the MPS CEO in May 2018 after 11 years at Boeing, where he fulfilled multiple roles, lastly as Chief Pilot Regulatory Strategy. He was also involved in the design and flight testing of all new Boeing products.
Philip’s career started in the Royal Netherlands Air Force, where he went through Officers and Flight training.

Philip co-chaired the FAA ARC regarding UPRT and chaired the ICAO LOCART initiative and EASA RMT.0581/0582 on UPRT. He is the Vice Chair (Chair Elect) of the RAeS Flight Crew Training Group.
Philip holds 737, 777 and 787 Type Ratings, and has instructed on all those types. In his career, Philip has operated, flight tested and instructed for over 13,000 flight hours.