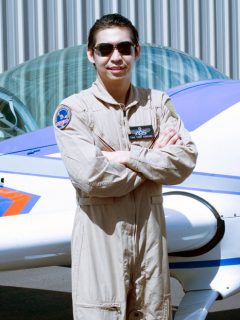 Tara ‘Liger’ Singkasa has been flying professionally for over 12 years as a pilot with experience in both military and civil aviation. Tara and his wife ‘BB’ are founders of Specialized Aviation Training, which is a partnership representative of APS Thailand operating out of Khon Kaen Airport, 450 km northeast of Bangkok.

After graduating from the Royal Thai Air Force Academy, Tara attended Air Force student pilot training and was selected to serve the Royal family fleet as a pilot on ATR72-500 as his first duty assignment. He was then assigned to be a flight instructor at the air force flight school on the CT/4E and instructed pre-solo, instrument, formation, and aerobatics instructional missions in support of student pilot training.

During that time, he also worked as a part-time flight instructor for civil flight schools delivering private pilot, commercial pilot, instrument, and multi-engine courses. He flew various types of training aircraft such as the Cessna 172, DA-40, and DA-42.

After 10 years in service, Tara decided to leave the Air Force and dedicate himself to civil flight instructing while also working as an aviation lecturer at Sripatum University.  He has helped flight schools become Approved Training Organizations (ATO’s) by developing instructional material and training syllabi for specific areas of ground and flight training courses. Tara has significant experience in working with Civil Aviation Authority of Thailand (CAAT) in ATO approval. He and his wife established their own company in order to partner with APS to provide life-saving UPRT in the Asia Pacific Region.

Tara and BB have no children but 4 dogs and 11 cats. They are crazy about animals!