Aviation Performance Solutions LLC (APS) announced today at the International Council of Air Shows (ICAS) Convention in Las Vegas, the induction of its VP of Training and Business Development, Randall Brooks, into the ICAS Foundation’s Air Show Hall of Fame. 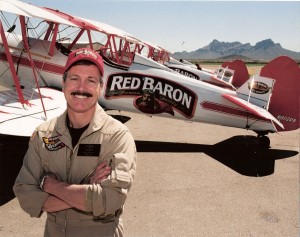 Las Vegas, Nevada – Dec 10, 2015 – Aviation Performance Solutions LLC (APS), a global flight training organization specializing in airplane Upset Prevention and Recovery Training (UPRT), announced today at the International Council of Air Shows (ICAS) Convention that its Vice President of Training and Business Development, Randall Brooks, has been inducted into the ICAS Foundation Air Show Hall of Fame as a member of the Red Baron Squadron.
The International Council of Air Shows Foundation’s Air Show Hall of Fame was created in 1995 to honor those who have made a significant contribution to the air show industry. Recognizing the industry’s outstanding professionals is one of the clearest goals of the Foundation. www.icasfoundation.org/about-the-hall-of-fame
The Red Baron Squadron operated a fleet of seven 450 horsepower Boeing Stearman aircraft in airshows and promotional activities throughout the U.S. The team’s four-ship formation of roaring, open cockpit biplanes brought the spirit of barnstorming alive through their display of aerobatics in airplanes designed originally as military training aircraft. Red Baron flight operations began in 1979 and stood down at the conclusion of the 2007 airshow season.Brooks was an inaugural member of the Red Baron Squadron’s airshow performances and served with the flying team for 13 years during three separate tours, ending up as the Director of Flight Operations for the team.
“Along with the 15 other members of the Red Baron Squadron’s team inducted, and its hardworking maintenance staff, I’m thrilled that the Red Baron Squadron’s flying efforts in front of millions of fans over the years have been recognized”, said Randall Brooks. In addition to his Red Baron Squadron involvement Mr. Brooks also flew airshows as a solo performer, as a member of a four-ship Pitts Special aerobatic team, a two-ship glider act, and last performed at Oshkosh in 2008 demonstrating the Eclipse Concept Jet single engine prototype. In all, Brooks’ airshow career spanned over ten years with over 500 surface level aerobatic demonstrations. Randall now manages Upset Prevention and Recovery Training flight operations for one of four APS global training centers in Arlington, Texas with two Extra 300L aircraft and multiple Level D jet aircraft simulators. www.apstraining.com
ABOUT AVIATION PERFORMANCE SOLUTIONS