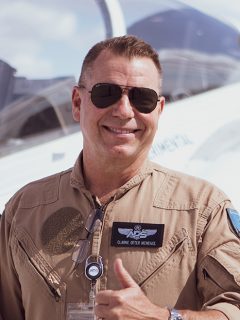 Clarke’s first operational posting as a Naval Aviator was on the USS Midway, home ported in Atsugi, Japan. During his service in the Navy, Clarke participated in three carrier cruises accumulating over 300 carrier landings, or “traps”. He was decorated for completing 36 combat missions as part of Operations Desert Storm and Southern Watch over Iraq. Clarke was recognized for his carrier landing performance on five separate occasions and became qualified as a Landing Signal Officer. He was then selected as an instructor in the FA-18 at Naval Air Station Lemoore.