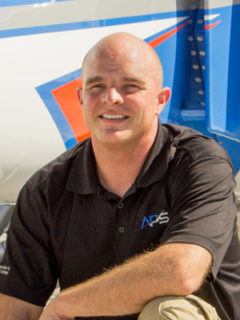 Born and raised on a dairy farm in Watertown, South Dakota, Travis Schleusner became interested in aviation as a boy, listening to his grandfather’s stories of the Jolly Rogers 90th Bomb Group in WWII where he piloted many missions in the Pacific. As his interest in aviation grew, everyday encounters with aviation such as watching crop dusters spraying fields amidst the expansive farmlands of South Dakota were some of the most memorable and awe inspiring experiences of his formative years. Travis’ aviation career started in 2000 when he enrolled in the FAA Airframe and/or Powerplant (A&P) school at Lake Area Technical Institute (LATI) in South Dakota — the only Aircraft Maintenance Technician program in the state. After graduating he landed a job at fast-paced commuter operation Great Lakes Airlines, where he joined a large team of A&P mechanics maintaining 30 Pratt & Whitney (P&W) PT6A-67D Beechcraft 1900s. From there he moved to corporate aviation with DynCorp International as a shift leader and inspection supervisor, maintaining six P&W JT15D Citation Ultra 560s and five P&W PT6 King Air 200s. Over the next several years, Travis maintained a diversity of other airplanes including Bombardier CRJs, Cessna 310s, Cessna 425s, and Shorts SD-360s. In 2012, he returned to South Dakota to serve as general manager at an FBO for five years, responsible for all aspects of the business operation including hiring, aircraft maintenance technician training, scheduling, maintenance, and all airworthiness inspections. Under his leadership, the FBO maintained and serviced Cessna C150s, C172s, C180s, C210s, C310s, Turboprop C425s, TPE-331 Garrett-powered AG Thrushes, Citation Mustangs, CJ2s, and Embraer EMB-145 ERJs. Looking for a change, and growing tired of South Dakota winters, Travis set his sights on Arizona and joined APS as the director of maintenance in August 2017. Travis is a key member of the APS operational team. He is a dynamic aircraft maintenance technician with inspection authorization (IA), known for his troubleshooting expertise, problem solving capabilities, and friendly, effective communications skills.