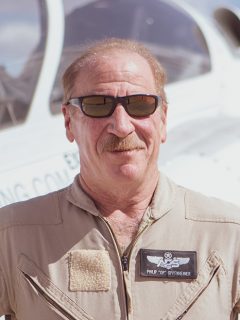 Philip Oppenheimer, call sign ‘O.P.,’ joined APS in 2001 after a distinguished 20-year career in the U.S. Air Force, collectively bringing him to over 35 years of flight operations and training experience as a pilot and aviation manager.

A retired Lieutenant Colonel, O.P. was raised in Mahopac, N.Y. He received his USAF commission from the ROTC Program, Texas A&M University in 1979 along with a B.S. in Education, Curriculum and Instruction, Math and Physics and a M.A. in Military Studies (History) from American Military University. O.P. completed undergraduate pilot training at Vance AFB, Oklahoma, flying the T-37 and T-38. His operational flying assignments included flying the A-10 at Myrtle Beach, South Carolina; the A/OA-37 at Howard AFB, Panama; the F-16A/B and F-16C/D at Hill AFB, Utah; and F-16C/D at Luke AFB, Arizona. During his F-16 tour at Hill AFB, O.P. deployed in support of Operation Desert Shield and flew 28 missions and 136 combat flight hours in support of Operation Desert Storm.

During his Air Force career, O.P. was a military formal course and line operations instructor pilot and flight examiner in the A/OA-37 and F-16. He also served as squadron chiefs of mobility, scheduling, training, standardization and evaluation (Stan/Eval), flight commander, wing assistant chief and wing chief of Stan/Eval, squadron assistant operations and operations officer, joint current air operations officer, and culminated as the commander of the 309th Fighter Squadron (F-16).

Upon retiring from the Air Force in 2001, O.P. joined APS as an advanced UPRT instructor and has since helped build APS’s UPRT program. He also coordinated, developed the curriculum and flight profiles for, provided ground training for, and flew as an instructor in the A-4 (and Alpha Jet) High Altitude UPRT Program(s) in support of the overall APS UPRT Program.