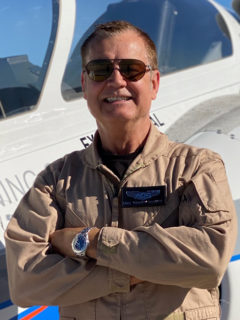 Mike Dowty, also known by his Navy call sign “Hooty,” has a passion for pilot training and aviation safety that spans decades. As the son of a career Air Force NCO, Mike was inspired to pursue a career in military aviation. Mike soloed as a member of the Naval Academy Flying Club one week prior to graduating from the United States Naval Academy.

With a B.S. Degree in General Engineering, and commissioned as a Navy Ensign, Mike reported for primary flight training in Pensacola, Florida in the T-34C Mentor. Intermediate training in the T-2C Buckeye and advanced training in the TA-4J Skyhawk in Kingsville, Texas lead to Mike’s selection for A-6E Intruder fleet replacement training in Virginia Beach, Virginia.

Mike’s first operational tour of duty as a Naval Aviator was on the USS America, ported in Virginia Beach. With deployments to the Caribbean, North Atlantic, Mediterranean and Indian Ocean, Mike logged over 1000 Intruder hours and over 300 carrier landings or “traps.” Mike was decorated for combat actions against Libya in the Gulf of Sidra and was credited with the first combat firing of the Harpoon air-to-surface missile. His first tour also included the successful barricade landing of a “crippled” A-6 that was missing the nose landing gear. He was selected to return to Pensacola where he served as a flight instructor teaching the “out of control flight” syllabus in the T-2C.

Returning to the fleet for operational duty in the Intruder, Mike deployed twice to the Arabian Gulf onboard USS Eisenhower, where he served as Squadron Safety Officer during Desert Shield and Desert Storm.  Mike was decorated for achieving an outstanding safety record with zero flight mishaps.

His next flying assignment was in Meridian, Mississippi where he lead the Instructor Training Unit for the T-2C and TA-4J aircraft.  Mike was serving as Air Wing Safety Officer when he conducted an investigation of a fatal aircraft accident.  His investigation report included recommendations that had an immediate impact on Naval Aviation Safety. As a result, Mike was hand selected to lead development and acceleration of implementing Navy CRM at the Naval Aviation Schools Command in Pensacola.

Mike retired from the Navy with 600 carrier landings over 3000 flight hours and began a successful career as a business development professional in the flight simulator and tactical missile markets. Upon retirement from a large defense company, Mike took the opportunity to return to a flying career.  He obtained a multi-engine rating on his commercial instrument certificate and was hired as a first officer to fly the Challenger 300/350 for a large business jet operator. Inspired by his passion for aviation safety and pilot training, Mike joined Aviation Performance Solutions where he is presently thrilled to be training in Arizona. He will be assigned as Deputy Senior UPRT Instructor at the APS operation in Dothan, Alabama.