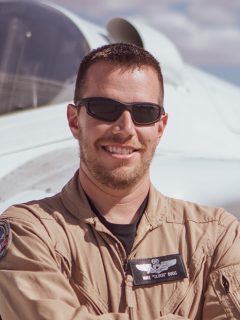 Mike ‘Slugg’ Bugg, Director of Safety at APS, has enjoyed a passion for aviation since he was 3 years old when his grandfather would regale him with flying stories from his time as an instructor pilot in the Army Air Corps. He soloed when he was 16 years old and earned his private pilot’s license when he was 18. Slugg’s plan from a young age was to eventually become an airline pilot. One of his dad’s childhood friends was an airline pilot and Naval Academy graduate and convinced him that going to service academy was the best route to becoming a pilot.

Mr. Bugg is a graduate of the United States Air Force Academy. After graduation he attend Undergraduate Pilot Training at Vance AFB, OK and was selected to fly the C-17 at McGuire AFB, NJ as his first duty assignment. He became an aircraft commander in the C-17 and flew missions worldwide in support of U.S. interests abroad, accumulating 680 combat hours.

For his next assignment, Slugg volunteered to go back to Vance AFB to teach as a T-6 instructor pilot. At Vance, Slugg was Unit Standardization and Evaluation Monitor, Scheduler, Assistant Flight Commander and Flight Commander.

He was next chosen to go to Randolph AFB, TX to continue to instruct in the T-6 at Pilot Instructor Training. While at Randolph AFB Slugg was a scheduler, squadron MWR officer, Supervisor of Flying and aircraft publications officer. He finished out his time in the Air Force as an Evaluator pilot at Randolph AFB, TX.

During his time flying the T-6 Slugg found that he really enjoyed instructing and specifically loved instructing aerobatics and formation. That passion to continue being an instructor pilot led him to find a place with APS where he has been since July 2017.