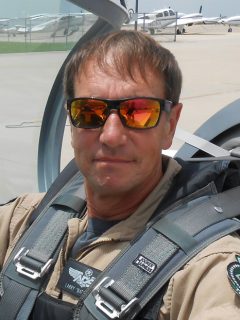 Larry Cross, also known by his Air Force call sign “Bat,” is a true aviation enthusiast, and his over 40 years in every type of aviation has successfully prepared him for his current position as an APS Advanced Instructor Pilot. As the son of aviators including CFIs, aircraft owners and Experimental Aviation Association life members, Larry grew up in an atmosphere supportive of his aviation interests. Larry gained his ratings at an early age and served as a CFI to help put himself through college. In addition to serving as a CFI, he participated in all the other fun requirements that makes a small Part 141 aviation organization operate efficiently: answering phones, washing airplanes, teaching ground school and assisting with the maintenance of the aircraft fleet.

Mr. Cross attended Youngstown State University majoring in Mechanical Engineering. During his studies, his laser focus was getting a technical degree that would allow him to gain a coveted USAF pilot training slot. He graduated with honors with a Bachelor of Science degree in Mechanical Engineering and nearly 700 hours of aviation experience. He successfully competed for and won one of less than 400 pilot training slots for Officer Training School graduates. Upon receiving his commission in the United States Air Force after Officer Training School, Larry excelled throughout USAF pilot training, achieving one of three Distinguished Graduate’s awards in his class of 60 graduates. After flight training, he was assigned as a T-37 Instructor at Mather AFB, CA.

Larry’s first assignment took advantage of his instructor experience. He expanded his repertoire by instructing new navigators in the T-37 in all phases of USAF operational employment including high altitude navigation, low-level navigation and advanced formation and air-to-air maneuvering. In addition, Larry served as an instructor and evaluator for new Instructor Pilots. He was one of two wing spin pilots instructing and evaluating the performance of less experienced instructors of all ranks. His spin instruction was praised by higher headquarters as exemplary.

After his instructor tour, Larry was awarded an operational posting in the most advanced air-to-air fighter in the world as a single-seat F-15C pilot. After training, Larry was assigned to the most advanced F-15C wing in the USAF and participated in Operation Urgent Fury and Operation Just Cause, as well as over 10 large force employment exercises (Red Flag). He excelled as an instructor, flight commander and assistant operations officer before being assigned as a Flying Training Unit instructor at Luke AFB, AZ.

He was responsible for training new fighter pilots in the F-15C and then transitioned to the newest multi-role fighter in the USAF, the F-15E. He completed a minimum time transition to the multi-mission aircraft and instructed in every facet of air-to-air and air-to-ground instruction including night low-level navigation and instruction in every weapon in the military environment. He served as a flight commander, instructor, evaluator and chief of wing standardization. His awards included wing top gun and mission commander for multiple long-range employment operations. He served as an instructor in the stand-up of the first operational F-15E wing, preparing those personnel for deployment to Operations Desert Shield and Desert Storm.

From there Bat was hand-picked to instruct in NATO at the premier large force employment school in Florennes, Belgium. The Tactical Leadership Programme prepares NATO air units to operate efficiently in various missions and environments including detachments to Scotland, England, the Netherlands, Sicily, Spain and Portugal. He served as a branch chief and instructed at RAF Lakenheath, England.

Larry transitioned to England full-time as an operational F-15E instructor, chief of standards, operation officer and deployed commander on multiple detachments to named operations in Iraq, Bosnia and Africa. He also lead multiple detachments deploying from Europe to the Continental United States and bases throughout the European and S.W. Asian theaters.

His final assignment was as an instructor on the Air Combat Command Inspector General where he was directly responsible for assessing the combat readiness of all operational tactical aircraft in the USAF.

After leaving the service, Bat was hired by a major domestic airline where he flew for six months before Sep 11, 2001. He gained a B-737 type rating and also a B-727 Flight Engineer’s rating. Upon notice of furlough, he rejoined the USAF.

After his final retirement from the service, he has served as an instructor for a major university and also a small Unmanned Aerial System instructor.

Since joining APS, Mr. Cross has distinguished himself as an instructor at the APS Texas location by doing any and all tasks needed to improve client experience. His varied background and willingness to pitch in resulted in an easy transition to the APS training environment.

Mr. Cross has over 5,700 hours of all attitude flight time with over 3,200 instructor hours in over 30 types of military and civilian aircraft.