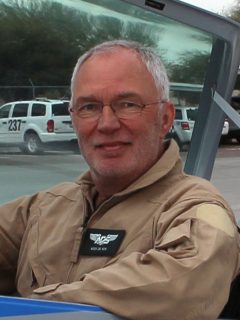 Kees retired from the Royal Netherlands Air Force where he served for 33 years as an officer and pilot. He attended Undergraduate Pilot Training at Sheppard AFB in Texas, where he flew the T-37 and T-38. After that he flew the NF5 A Freedom Fighter. As an instructor, he flew the Beech Bonanza BE-33 and the Pilatus PC-7 turbo prop trainer.

After his duties as a basic instructor, Kees flew the KDC-10 tanker aircraft, which provides air-to-air refueling and carries passengers and cargo at the same time. Kees qualified as a TRI and TRE and later became head of training on the KDC-10. The last duty Kees performed in the Royal Netherlands Air Force was flying the Gulfstream G4 as Chief Pilot.

On both the KDC-10 and Gulfstream Kees flew missions all over the world, including combat missions over and into former Yugoslavia, Africa, Afghanistan and Iraq.

Prior to joining the APS team, Kees worked two years at TTC flying the Slingsby T67M Firefly, which is an aerobatic category aircraft, and the Cessna 172R Skyhawk. Kees enjoys working as an instructor sharing his knowledge and experience. Most people call him a people-person.

Kees has 7000+ hours of total flying time and 3000+ hours as an instructor pilot, including all-attitude-maneuvering.

Kees is married to Dominique, who was born in Belgium. Together Dominique and Kees have 5 children, who are now adults. They enjoy family dinners where they like to talk about what they think matters in life.