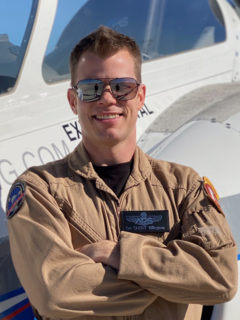 Ian “Shout” Billington developed his love of flying at a very young age after being fascinated by airshow aerial demonstrations. After ascending to the rank of Detachment Commander in JROTC at his hometown high school, he pursued his dream of flying at the United States Air Force Academy. Ian graduated in 2003 with a B.S. in Human Factors Engineering, and during his time at the academy, he earned his Parachutist Wings, soloed in gliders and earned his Private Pilot’s License. His first active duty assignment was as an Envelope Expansion Engineer with the F/A-22 Raptor Developmental Test team, followed by USAF Pilot Training at Laughlin AFB, TX.

Ian was asked to return to the T-6A Texan II as a First Assignment Instructor Pilot to teach the newest Air Force pilots the basics of flight. It was during this tour that Ian developed the passion for teaching others to fly with a strict emphasis on safety that would serve him well in his career. While instructing in the T-6, Ian was able to achieve a Master’s Degree in Aeronautical Engineering from Embry-Riddle Aeronautical University and graduated with Distinction. After logging nearly 1300 hours in the T-6 as an Instructor and Squadron Check Pilot, Ian was awarded his first choice of aircraft and went on to train in the F-16C/D Viper. His operational assignments took him around the globe to Osan AB, South Korea; Shaw AFB, SC; Luke AFB, AZ, where he finished his active duty career; and finally to the Arizona ANG in Tucson as an F-16C Basic Course instructor for both U.S. and international trainees. After a stint as a Department of Defense contractor in Tucson AZ, Ian and his family made the decision to pursue a flying career outside of the military in late 2018. To prepare himself for the transition, he obtained an Air Transport Pilot (ATP) certificate, earned his Certified Flight Instructor (CFI) and Instrument Instructor Airplane (CFII) certificates, received a tailwheel endorsement and completed a B-737 type-rating.

Ian lives in Arizona with his wife Kimberly, their son Lauden and two Labrador Retrievers. He continues to both serve in the Air National Guard and further his flying career with APS while awaiting the arrival of his second child.