May 3, 2014, 12:55 AM – Aviation Performance Solutions has convinced operators of the value of upset prevention and recovery training (UPRT). The Mesa, Ariz.-based company has expanded its customer base rapidly even during the economic slump and is now pushing to take its message around the world. 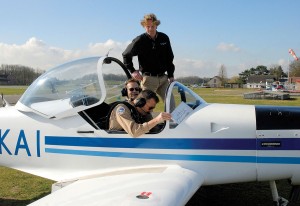 As APS founder Paul “BJ” Ransbury told AIN, professional pilots “walk away from [our training] with dramatically increased chances to prevent an accident.”
APS’s approach is deliberately simple, but effective: take pilots back to light aircraft to demonstrate recovery from unusual attitudes, and aerodynamic effects, before allowing them to hone recovery techniques themselves. Then, take them to a full-motion simulator.
For all these reasons and more, AIN was happy to accept an invitation from APS to learn more about the training and the company’s new European training center in Holland, which was announced one year ago at EBACE. APS Europe is based at Breda International Airport (EHSE), which is in the process of being rebranded as Brega International Airport.
AIN’s training day took place on the first anniversary of an accident in Europe that further underlined the need for such training, even for experienced pilots. On March 4 last year a Beechcraft Premier stalled and crashed just after takeoff from Annemasse in France, killing the pilot and one of the two passengers. According to the Flight Safety Foundation account, “Several witnesses reported seeing the airplane with a high nose-up pitch attitude and a low rate of climb. Three seconds after rotation the ‘bank angle’ warning, indicating excessive bank, and then the stall warning, was recorded several times on the CVR. Several witnesses saw the airplane turn sharply to the right and then to the left.”
Recovery from this kind of situation requires understanding of what is happening and is not especially difficult, although often it involves doing something counter-intuitive: pushing the nose down and perhaps looking at the ground momentarily as the wings are “unloaded,” reduces the stall speed and quickly re-establishes normal aerodynamic flow, allowing for a recovery and resumed climb.

FAA Master CFI-Aerobatic Clarke “Otter” McNeace, APS Europe v-p of flight training and standards and a former U.S. Navy F/A-18 and Southwest 737 pilot, was quick to point out in the course briefing that the course flying is not aerobatics but upset prevention and recovery training for professional pilots. “We prefer not to use the word aerobatics,” he told AIN because that suggests something quite different. What his company conducts, he said, “are planned precision maneuvers.” “We feel now we have a highly effective program, but we are continually trying to upgrade and improve it,” said McNeace. The headline course at APS Europe, Integrated Professional Pilot UPRT (costing $6,858), involves three days at Breda International Airport, with eight hours of ground training, classroom-based training available (three to eight hours), 4.3 hours of flight time in one of APS Europe’s two Slingsby T-67 aerobatic trainers, and a two-hour session in CAE’s 737NG full-flight simulator at Amsterdam Schiphol Airport.
For AIN, this was summarized in one flight and one 20-minute simulator session, but normally there would be three main flights: familiarization, stalls and so on; spiral dives and unusual attitudes; and a flight where this is all practiced “under the hood.” The third flight also includes spin awareness training.
“Our program targets loss of control in flight [LOC-I],” said McNeace, who pointed to the statistics that make LOC-I the biggest killer, for example after wind shear or after-takeoff stall. He then moved on to explain graphically how “most pilots operate in only 4.9 percent of all possible attitudes, but that things can change very quickly,” citing as an example the rapid wing drop that can accompany a skidded-turn stall on the turn to final. He gave examples of corporate pilots coming to APS who had no ability to recovery from such an event but after three days not only knew how to recover but were less likely to allow it to happen in the first place, which is where “prevention” comes in.
APS has done research “to help give flight training managers something to justify [the training] to the bean counters.” For example, to show that pilots came to APS “with low or little skill and left highly skilled,” APS put 115 pilots through five different types of upset, measuring the pilots’ ability on the first flight and fifth flight and, to indicate retention levels, their performance after 18 months. McNeace recounted, “Only 28 percent were safe and effective on their first flight, but after the fifth flight the number was 96 percent. Retention was 86.7 percent after one to three years, and an average of 18 months, which shows you really can deliver lifesaving skills, and pilots can retain them.”
APS would like to see “on-aircraft” UPRT training mandated but it is a battle, with some believing that simulators alone suffice. However, APS courses comply with the current standard, the Upset Recovery Training Aid (the 443-page industry “bible” on the topic).

The program’s ground school sets the scene for the flying elements, providing the pilot with an appreciation of why control is lost aerodynamically and how an easy-to-recall technique–push, power, rudder, roll, recover–can be applied in almost all cases. “The industry does not recognize that recovery teaches prevention. You never forget it once you’ve actually done it,” said McNeace.
The push element unloads the wings and reduces the stall speed, which at 2g will be 1.414 (the square root of 2) times that at 1g, and at half g it is much lower again, so even at low speed in a climb-out, pushing forward if there are signs of stall has an immediate effect. McNeace illustrated how pulling back hard on the stick causes an immediate stall, as well, but releasing immediately stops the buffet.
Power is reduced if the aircraft is accelerating nose-down toward the ground, and increased if it is nose-high. Rudder is then a check, to ensure it is neutral, and not used for roll control. The ailerons are for primary roll control so the next step is to roll to a level attitude, before recovering, which usually means pulling out of a dive without overstressing or stalling the aircraft and allowing the speed to bleed off before applying power again. A 2-g recovery was used with AIN as there was plenty of altitude left for recovery, with the aircraft 2,000 to 3,000 feet above the Dutch coast.
As McNeace explained in the pre-flight briefing, one of the main aims of practicing in an actual aircraft is to address the “startle factor,” so the pilot can learn to respond calmly to unexpected, but quite dramatic, upset events. He added that under current plans, ICAO is planning to advise that UPRT can be done in normal-category aircraft, but McNeace disagrees, saying “The safety margin is just not there. ICAO has not embraced this yet.” He also believes that pilots need to experience the entire possible flight envelope, and to “go over the edge.”
AIN was treated in summary to all the stalls, incipient spins, spiral dives and unusual attitudes, and then had a chance to apply the APS philosophy, which worked well. Doing a few of these under the hood showed how important that additional flight would be for a professional pilot, to enhance their IFR training, but knowing how such upsets looked and felt in visual conditions first was essential. Although you’re relying on instruments, you can visualize what is happening and what the recovery sequence is. In fact, for the first three flights the attitude indicator is covered and the pilot is encouraged to look outside, and tune into the seat of his pants.

“The simulator is where we show that we can transfer the training and close the loop,” said McNeace during the earlier briefing. Flying the 737NG full-flight simulator, he demonstrated that the same recovery procedure could be applied to the 737 as the Firefly and that, first, the actual aircraft’s controllable flight envelope is far wider than most people realize; and, second, “the simulator’s valid flight envelope is much more restrictive than most people realize.” NASA Langley has done work to address this, and McNeace said he has tried a NASA simulator in which stalls are now possible.
One advantage AIN noticed in carrying out recoveries was that the flight management system’s display of stall speed on the speed tape was most useful as you pull back enough to recover but without the stall speed coming up to meet the airspeed.
Immediately after a stall, however, pushing forward in the simulator is hard to judge as there is no sensation of gs, and the absence of negative g in particular robs the exercise of realism. However, after flying in the light aircraft, this didn’t seem to matter unduly because you could imagine it. Thus it was clear how invaluable that training experience, in the sky in a real airplane, had been.

Practicing stalls in airliner simulators at high altitude could illustrate how power alone cannot be used to recover, unlike at lower altitudes (although this technique is wrong, as the nose should be pushed forward also), said Clarke “Otter” McNeace, v-p for flight training and standards for APS Europe. He pointed to a DC-8 post-maintenance check flight in the 1990s where the crew initiated a clean stall at 13,500 feet msl to test the stick shaker. It did not operate and the aircraft entered a stall. The subsequent sequence of events was similar to AF447, the Air France Airbus A330 that was lost in 2009 over the South Atlantic. “The pilot flying called for max power but kept pulling back,” said McNeace. “The angle of attack and sink rate increased until they hit the ground…They were 26 degrees nose low… but still stalled. Most pilots can’t understand that,” he added. “He still needed to push.” –I.S.