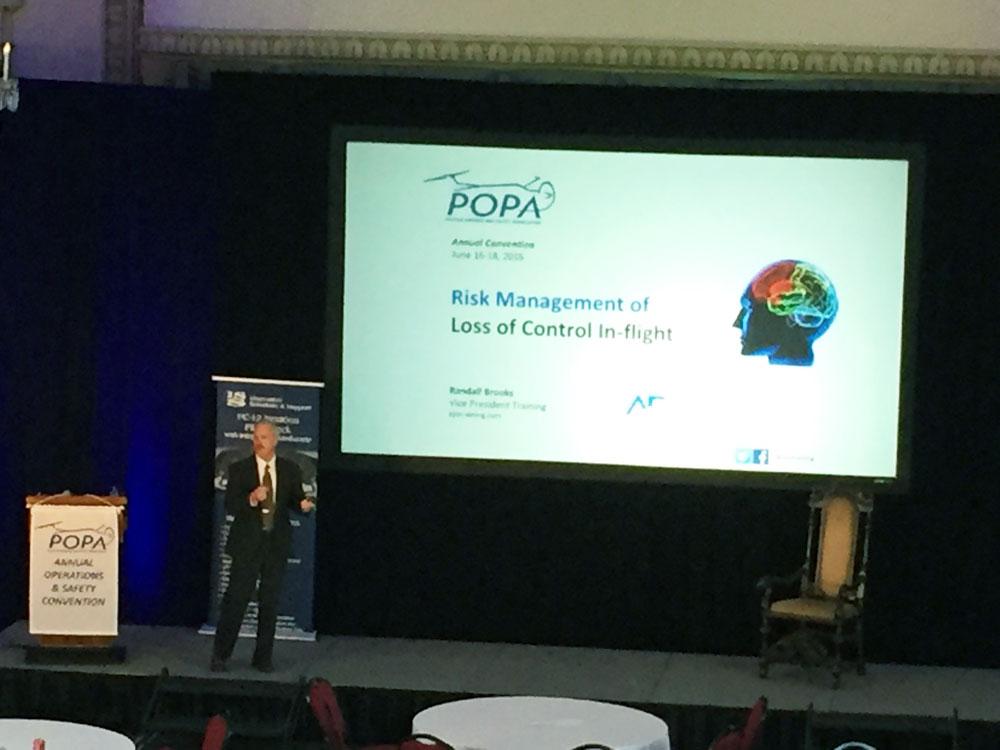 For centuries the high cliffs overlooking the Saint Lawrence River provided a strategic defensive position which meant safety for the early settlers of what is now Quebec City. It was in that location that APS VP of Training Randall Brooks presented a strategic approach to risk management for Pilatus owners and pilots to keep them safe in the heights they now enjoy in their PC-12s.
This year marked the 20th annual convention for the Pilatus Owners and Pilots Association (POPA). The site chosen for this year’s gathering has a long history of its own befitting the occasion. The Fairmont Le Château Frontenac hosted meetings between President Roosevelt, Winston Churchill and other allied leaders in 1944, as well as other dignitaries and celebrities over the years since its opening in 1893.
In addition to the social aspects of the gathering, Safety, Education, and Communication are three of the hallmarks of POPA and it was in that spirit which APS provided information which helped attendees to better understand the risks posed by Loss of Control In-flight (LOC-I), which the NTSB has identified as the number one cause of fatalities in every category of aviation. This lead the NTSB to place prevention of LOC-I on it’s 2016 “Most Wanted” list.
Offering an example of his own risk mitigation experience, Brooks related a story from his last appearance in Quebec City as part of a formation aerobatic demonstration team. Held in the years immediately prior to the end of the Cold War, Soviet test pilots of the largest airplane in the world, the Antonov 225, who were also appearing at the show were invited to fly with his team. Flying with a large Soviet pilot riding along on the controls through formation aerobatics without a common functional language presented an uncomfortable risk which was forever avoided in the future!
Participants heard about how the risk management concepts and techniques used to mitigate other well known aviation threats could be applied to reduce the less apparent, but potentially catastrophic risk of LOC-I. Information specific to their aircraft was presented regarding the warning and protective systems of their aircraft and training which could provide greater resilience in the face of system failures.
Mr. Brooks also presented information regarding gaps which exist between the training currently required by regulations and actual situations which pilots might face in an unexpected aircraft upset event, making guests aware of the difference which can exist between licensing training and the specific knowledge and skills which may be required in an airplane upset. Upset recovery concepts and skills can be counterintuitive, and therefore difficult to apply effectively in the time critical, life threatening situation that an airplane upset event creates if not learned and practiced in advance.
After hearing the facts regarding airplane LOC-I accidents, and understanding the limitations which normal category aircraft and flight simulators have in accurately portraying the LOC-I situations necessary to help pilots to gain proficiency in upset recovery, Brooks asked viewers to consider their risk management strategies in relation to the other risks that they trained for in the normal flight envelope. In the light of the information and facts presented all were asked to make their own personal decisions regarding their individual course of action in mitigating the threat of LOC-I. As with all of the factors which we weigh and measure in order to eliminate the threats and errors associated with flying, its is only through analysis, judgement, and training that we make the best decisions we can to promote safety in our own flight operations, and to preserve the safety of our passengers, aircraft, and ourselves.